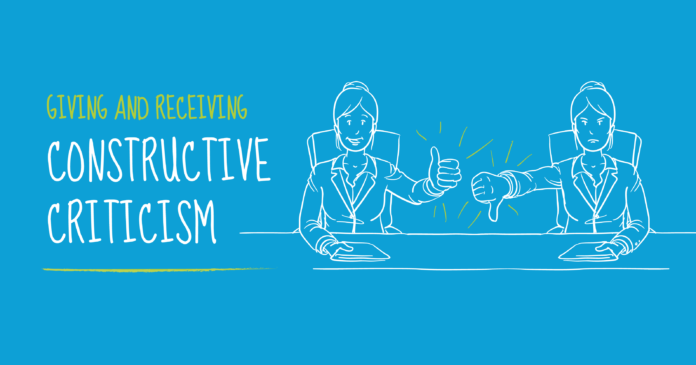 As responsible employers, parents, and friends, we have an obligation to correct the mistakes of other people in order to enhance their personal success. The task before us is how to correct a deficiency without damaging the delicate ego that can sometimes get in the way. Too often people criticize someone’s behavior without providing a solution and this is detrimental because it then becomes a personal attack on the person that only aims to demerit them. Constructive criticism involves pointing out their weakness and offering a solution to correct it. In order to give constructive criticism, we must seek the solution to the problem before we point it out to the person. By doing this, we effectively separate the behavior from the ego and preserve the relationship in the process.

Here Are Some Strategies For Giving Constructive Criticism

1. Never criticize while you are angry with the person. If your emotions are controlling your actions, then avoid any type of criticism. It becomes too easy to use that criticism as a chance to make a personal attack on the other person when emotions are high. Distance yourself and regain your own composure before you address a behavior that needs correcting.

2. Offer a better solution. Know the difference between disliking a certain behavior because it disagrees with your own personal preference versus disliking a behavior in favor of a more efficient way or correct way of doing something. Avoid making a criticism and then attempting to support it with emotional appeals because the issue then becomes a matter of personal preference and conflicting egos. Instead, use the power of logic to show the person that there really is a better way of doing the same thing that will enhance their own success and productivity.

3. Always let the person save face. This means respect the person, even if they did something completely inappropriate. The psychological consequences of embarrassing or disrespecting someone in front of their peers is very severe. It is so severe in fact, that such embarrassment has been a major factor in 80% of all violent incidents in the workplace and at schools. Criticism is a personal and private process that is not to be shared with anyone else. Also, it is just as important not to make it apparent to other people that you are giving, or going to give criticism. Asking someone to come into your office in front their peers can be just as damaging as criticizing them in public. Keep it very confidential and respect your counterpart’s needs to save face in front of their peers.

4. Focus on the problem, not the person. When giving constructive criticism, make sure that you stay focused on addressing the problem and not the person. The problem is an objective issue that you can work cooperatively on to enhance both of your interests. Focusing in on the person, however, will always be construed as a personal attack against them–even if it is not meant to be. Personal attacks are always followed up with resentment and anger, which can actually be more detrimental in the long run because it can cause deep-seated resentment, which in turn, can lead to poor moral, clandestine or saboteur behavior, and passive-resistance. Remember that the person has feelings and those feelings can be easily broken by a wrong approach. Whenever you give criticism, follow the golden rule of attacking the problem, while being gentle on the person.

5. Empathize with their position. Empathy is the ability to step into the shoes of the other person and see the world from their perspective. Sometimes we forget what it is like to be the new person on the job because we have grown accustom to a certain procedure or routine that is second nature to us. Remember that people don’t always see things as you do and part of being a good educator is being able to understand the other person’s position and work with them at their level–not your own.

6. Never label the person. Attaching a negative label on the person being criticized is an inappropriate approach because it dehumanizes them, making it easier for you to be angry with them and it demoralizes them.

7. Focus on the future, not the past. Blaming someone for their past behavior does nothing but create conflict. The past is over with and your main concern is that it does not happen in the future. So instead of dwelling on past behavior, use it as a teaching tool so that they can improve in the future.

8. Use softening words to pad your criticism. Softening words are designed to “soften” harsh-sounding statements.. Softeners work because they leave a lot of room for interpretation of the statement that follows it. Some examples of softeners are, “I think,” “I suppose,” “it seems,” “I believe,” etc. So instead of making a harsh statement such as, “You’re report is terrible.” Replace it with a softened criticism such as, “It seems to me that this part of your report could use some revision.” The psychological effect of rewording a statement can lead to a greater amount of persuasion and conflict avoidance.