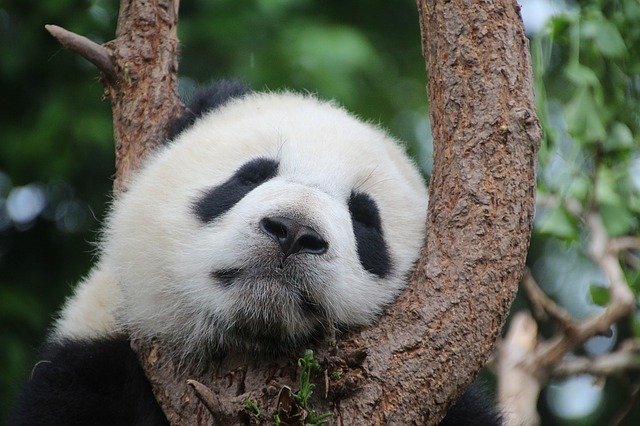 The giant panda, also known as panda bear or simply panda, is a bear native to south central China. It is easily recognised by the large, distinctive black patches around its eyes, over the ears, and across its round body. The name “giant panda” is sometimes used to distinguish it from the distantly related red panda. Though it belongs to the order Carnivora, the giant panda is a folivore, with bamboo shoots and leaves making up more than 99% of its diet. Giant pandas in the wild will occasionally eat other grasses, wild tubers, or even meat in the form of birds, rodents, or carrion. In captivity, they may receive honey, eggs, fish, yams, shrub leaves, oranges, or bananas along with specially prepared food.

The giant panda lives in a few mountain ranges in central China, mainly in Sichuan, but also in neighbouring Shaanxi and Gansu.

According to New Scientist Website, a bear very similar to a panda lived in what’s now Hungary 10 million years ago. The creature ate a similar diet to modern giant pandas, suggesting their unusual bamboo-chewing lifestyle has survived through evolutionary time.

Pandas have been mocked for their decidedly non-bearlike vegetarian diets, their apparent lack of interest in—and aptitude for—sex, their inclination to spend the majority of their time sitting, eating, scratching , and defecating (about 40 times per day)—even for being, shall we say, plump. These rather “unfit” characteristics have made the giant panda a favorite animal of creationists, who argue that the panda’s survival proves the existence of God.

How is it, they ask, that such a species could have “evolved” to be so poorly suited for survival and could have lasted these “alleged” tens of thousands of years without a little help from a higher power?

There is a reasonable evolutionary expression for the panda’s seemingly foolish choice for bamboo: lack of rival(s). When pandas split off from the bear lineage about 3 million years ago, tasty and nutritious food like meat, fruit, and nuts may have been hard to obtain while bamboo was omnipresent—a wide-open environmental niche. So there were two choices: Exert some earnest effort to get the great stuff or munch away on the tireless supply of wooden meadows.

The panda included its vegetarianism with a few natural adjustments—extended biting muscles (those adorable jowls), their popular “fingers,” and an inappreciably altered digestive system. But the most notable alterations were behavioral. Pandas must reduce energy expenses in every phase of their lives: restricting movement and mating seasons, having a low surface-area-to-volume ratio (i.e., being fat) to conserve heat, and napping as much as possible.

Pandas are up against some pressing complications when it comes to having sex: The male penis is disproportionately small, females rarely go into heat, and males do not inherently know how to mate, among other problems.

That being said, we still have fewer ideas about how on earth Pandas evolved and survived.

Fossils suggest that the prehistoric range of giant pandas was much greater than at present and that’s just it.