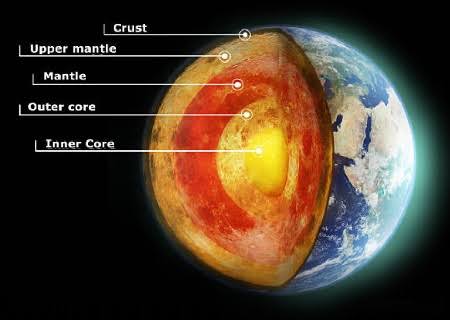 Deep within the earth, molten rock and gasses continuously move against the earth’s crust. It is within this extremely high pressure and heat that diamonds and peridot are formed. Diamonds begin to crystallize in the magma 109 to 149 miles beneath the earth’s surface, and peridots are formed 20 to 55 miles below. As the earth’s crust moves and crushes each other, these deposits begin to work their way toward the surface.

Generally, gemstones are classified through four processes, although some gemstones undergo more than one process in their formation.

Minerals are formed as the molten rock, or magma, cools on its journey to the earth’s crust. Different elements in the magma create different minerals, and these minerals can crystallize as they head toward the earth’s crust, forming rubies, sapphires, moonstone, garnets, and zircons embedded within fine-grained rocks.

Some gemstones form within gas bubbles which occur when magma decreases in pressure quickly, as in a volcanic eruption. A high concentration of various elements in the bubbles creates garnets, topaz and spinels.

Sometimes water enters the mantle through cracks in the crust and combines with special elements like carbon dioxide, fluorine, beryllium, and other elements that are easily vaporized. This hydrothermal liquid may dissolve minerals or combine with surface water in cracks to form mineral veins. With time, temperature, pressure, and available space, crystals such as amethysts, topaz, and emeralds are formed.

A pegmatite is a cavity formed by volatiles, or quickly vaporized elements. Within the pegmatite elements crystallize forming topaz, tourmalines, kunzites, aquamarines and morganites.

When magma forces itself through existing rock in the earth’s crust, as in a volcano, the heat can re-melt the already formed rock and create new crystals that are more heat-resistant than before. Lapis lazuli, garnets, diopsides, and spinels are the result.

When continental plates shift on the earth, the resulting heat and pressure form mountains. The existing mineral crystals become unstable and change into new crystals, creating tanzanites and varieties of garnets.

Rain and water from streams, lakes, and oceans can make new gems as it passes over and combines with different chemicals. As water levels change, some of these new stones are deposited on the surface ground, or upper levels of crust. Turquoise, opals, malachite, amethyst, azurites, and agates are often left exposed.

FORMED IN THE MANTLE

The earth’s mantle is 83% of the earth’s volume and 1,864 miles thick. Where the mantle and crust meet, there is constant motion, pressure, and extreme temperatures. It is this combination of conditions that create the hardest compound known to man, diamonds.