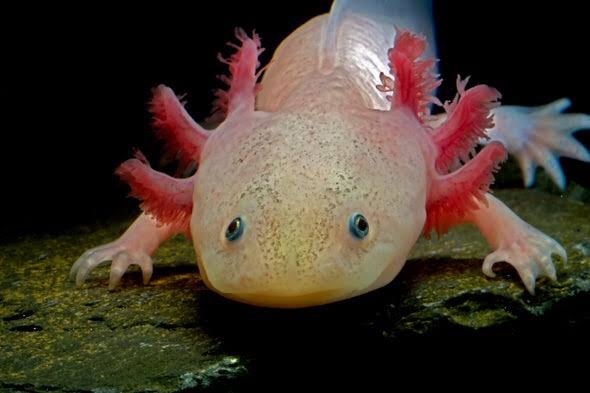 In biology, regeneration is the process of renewal, restoration, and growth that makes genomes, cells, organisms, and ecosystems resilient to natural fluctuations or events that cause disturbance or damage. Every species is capable of regeneration, from bacteria to humans. Regeneration can either be complete where the new tissue is the same as the lost tissue, or incomplete where after the necrotic tissue comes fibrosis.

Limb regeneration in the axolotl (Mexican Walking Fish) and newt has been extensively studied and researched. Urodele amphibians, such as salamanders and newts, display the highest regenerative ability among tetrapods. As such, they can fully regenerate their limbs, tail, jaws, and retina via epimorphic regeneration leading to functional replacement with new tissue. Salamander limb regeneration occurs in two main steps. First, the local cells dedifferentiate at the wound site into progenitor to form a blastema. Second, the blastemal cells will undergo proliferation, patterning, differentiation and growth using similar genetic mechanisms that deployed during embryonic development. Ultimately, blastemal cells will generate all the cells for the new structure.

After amputation, the epidermis migrates to cover the stump in 1–2 hours, forming a structure called the wound epithelium (WE). Epidermal cells continue to migrate over the WE, resulting in a thickened, specialized signaling center called the apical epithelial cap (AEC). Over the next several days there are changes in the underlying stump tissues that result in the formation of a blastema (a mass of dedifferentiated proliferating cells). As the blastema forms, pattern formation genes – such as HoxA and HoxD – are activated as they were when the limb was formed in the embryo. The positional identity of the distal tip of the limb (i.e. the autopod, which is the hand or foot) is formed first in the blastema. Intermediate positional identities between the stump and the distal tip are then filled in through a process called intercalation. Motor neurons, muscle, and blood vessels grow with the regenerated limb, and reestablish the connections that were present prior to amputation. The time that this entire process takes varies according to the age of the animal, ranging from about a month to around three months in the adult and then the limb becomes fully functional. Researchers at Australian Regenerative Medicine Institute at Monash University, have published that when macrophages, which eat up material debris, were removed, salamanders lost their ability to regenerate and formed scarred tissue instead.

In spite of the historically few researchers studying limb regeneration, remarkable progress has been made recently in establishing the neotenous amphibian the axolotl (Ambystoma mexicanum) as a model genetic organism. This progress has been facilitated by advances in genomics, bioinformatics, and somatic cell transgenesis in other fields, that have created the opportunity to investigate the mechanisms of important biological properties, such as limb regeneration, in the axolotl. The Ambystoma Genetic Stock Center (AGSC) is a self-sustaining, breeding colony of the axolotl supported by the National Science Foundation as a Living Stock Collection. Located at the University of Kentucky, the AGSC is dedicated to supplying genetically well-characterized axolotl embryos, larvae, and adults to laboratories throughout the United States and abroad. An NIH-funded NCRR grant has led to the establishment of the Ambystoma EST database, the Salamander Genome Project (SGP) that has led to the creation of the first amphibian gene map and several annotated molecular data bases, and the creation of the research community web portal.

Anurans can only regenerate their limbs during embryonic development. Once the limb skeleton has developed regeneration does not occur (Xenopus can grow a cartilaginous spike after amputation). Reactive oxygen species (ROS) appear to be required for a regeneration response in the anuran larvae. ROS production is essential to activate the Wnt signaling pathway, which has been associated with regeneration in other systems. Limb regeneration in salamanders occurs in two major steps. First, adult cells de-differentiate into progenitor cells which will replace the tissues they are derived from. Second, these progenitor cells then proliferate and differentiate until they have completely replaced the missing structure