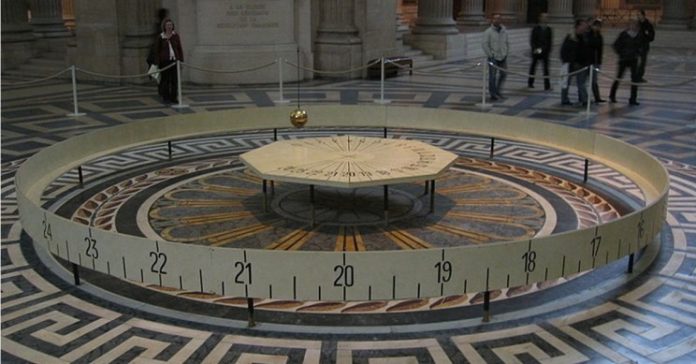 You’re on a giant sphere 8,000 miles (12,700 kilometres) in diameter that spins at about 1,000 miles (1,700 kilometres) per hour as it orbits the sun at 67,000 miles (107,000 kilometres) per hour. But you can’t tell by looking. To you, it feels like you live on a flat, motionless plane where the sun and stars move overhead but you stay safe and stationary. It took us centuries of scientific research to break ourselves out of that pleasant illusion, and we did it all before the first spacecraft ever left the atmosphere. How? Human ingenuity. In the case of learning that the Earth rotates, that ingenuity came from a 32-year-old medical school dropout.

Reasons why we know the earth is ROUND.

Jean Bernard Léon Foucault — Léon to his friends — was born in Paris in 1819 as the son of a publisher. He grew up shy and never did very well academically, but when his mother expressed a desire for him to become a doctor, he enrolled in medical school. The story goes that he quickly discovered he couldn’t handle the sight of blood, so he dropped out. Despite his lack of formal training, he was fascinated by science and engineering, which led him to get a job as a lab assistant and dabble in the recently invented Daguerre photographic process — which, incidentally, he used to produce the world’s first photograph of the sun. He also devised a way to measure the speed of light and demonstrated that light travels more slowly in water than in air in 1850. You know, NBD.

Astronomers had always known that something was turning — they just weren’t sure what. If you watch the sky for long enough, you can see that the stars appear to move in circles around a line that matches up with the Earth’s axis. Up until the 17th century, people believed that this was because the stars were attached to a sphere that rotates around the Earth. Several scientists throughout the centuries, including Giordano Bruno and Galileo, proposed that it was the Earth, not the heavens, that moved. They were put to death or imprisoned, respectively, for these heretical views. By Foucault’s time, most educated people sided with Galileo and his ilk and agreed that the Earth rotates. The only evidence they had was from astronomical observations, however; no one had been able to come up with a visual demonstration of the motion of the Earth. That is, until one fateful night in January of 1851, when Foucault had a stroke of genius. He realized that if he could hang a pendulum in a way that gave it total freedom of movement, it would show the effects of the Earth’s rotation.

Here’s why Foucault’s idea worked: Imagine you’re standing on the North Pole and you have a super-tall pendulum that’s swinging from side to side, tracing its path in a pile of sand. As the Earth turned beneath the pendulum, the pendulum would keep swinging in its original direction, irrespective of the ground beneath it. That means that over the course of a 24-hour day, the path of the pendulum would appear to shift little by little until it had drawn a line at every degree of a 360-degree circle. The pendulum is just swinging side to side; it’s the Earth that’s moving beneath it. That proves that the Earth rotates.

Foucault realized that the pendulum would only turn 360 degrees in a 24-hour day if it were at either of the poles; it would take slightly longer at another latitude and it wouldn’t shift at all at the equator. To define exactly how long this rotation might take at any given latitude, Foucault conceived of the sine law. It said that in Paris, where he successfully completed his experiment in solitude, the pendulum would turn 270 degrees in one day.

On February 2, 1851, Foucault sent a notice to all of the scientists in Paris with this simple statement: “You are invited to see the Earth turn.” The next day, the city’s scientists assembled in the Meridian Room of the Paris Observatory and watched the successful first demonstration of Foucault’s pendulum. Foucault repeated the demonstration for the public a month later in the Pantheon, where he hung a 62-pound (28-kilogram) brass bob from a 220-foot (67-meter) long wire and let it swing through a thin layer of sand on the building’s elegant marble floor.

Within a few years, Foucault had invented another approach to observing Earth’s rotation — the gyroscope — and had come up with a device that could keep his pendulum swinging in perpetuity. Napoleon III appointed him to the position of Physicist Attached to the Imperial Observatory. Despite all of this, the French Academy of Sciences wouldn’t accept him. It took him multiple petitions before he was finally elected in 1865. He died three years later.

Today, you can see full-scale Foucault pendulums at museums and universities all over the world. They’re a poignant reminder of how a little curiosity and confidence can lead to Earth-turning discoveries.