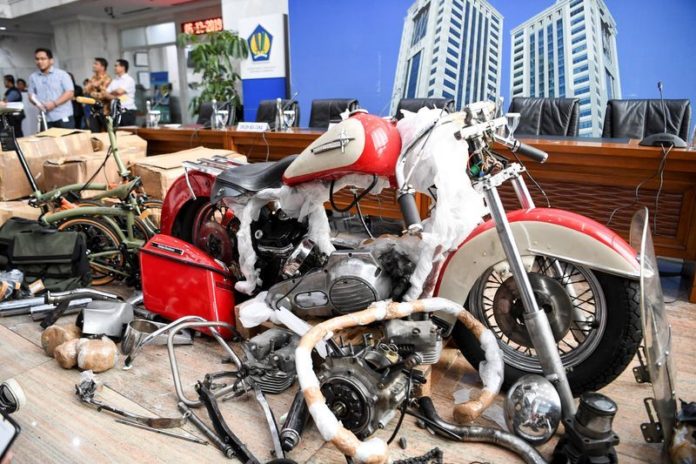 Evidences of Harley Davidson and Brompton bicycle, which were brought into Indonesia on a new Airbus plane of PT Garuda Indonesia, are pictured before a news conference at Indonesian Finance Ministry in Jakarta, Indonesia, December 5, 2019 in this photo taken by Antara Foto above.

Indonesia’s State-Owned Enterprises Minister Erick Thohir on Thursday said he will fire CEO Ari Askhara for allegedly trying to evade tax by bringing into the country a Harley Davidson motorbike onboard a new plane from France.

Askhara has been suspended pending a shareholders’ meeting due in coming weeks to determine his fate.

Thohir said the smuggling also involved at least one other Garuda employee based in Europe who helped transfer the payment and assisted in the delivery of the motorbike. He said the investigation will continue to ascertain whether more employees were involved.

Sahala Lumban Gaol, chief commissioner of Garuda, said in a televised press conference on Saturday that members of the board of directors who were “indicated to have been involved directly or indirectly” in the incident have been suspended.

He declined to disclose the names of the suspended directors or say how many were affected.

Askhara has not responded publicly to the accusations of smuggling. Reuters made repeated unsuccessful attempts to contact Askhara for comment.

Chief financial officer Fuad Rizal has been appointed as acting CEO until a shareholders’ meeting to name a new chief is held, Garuda said in a statement on Friday.

Lumban Gaol said interim directors will be appointed to ensure no disruptions to Garuda’s business operations.

Transportation Minister on Friday said the company will be fined for not including the motorbike in the cargo list. The motorbike was taken apart and packed in separate boxes, according to Finance Minister Sri Mulyani Indrawati.

Two expensive undeclared bicycles were also found onboard the plane.