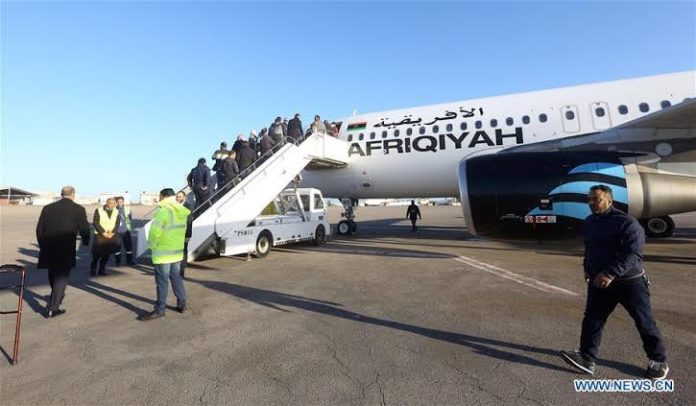 TRIPOLI (Reuters) – Mitiga, the only functioning airport in Libya’s capital Tripoli, resumed flight operations on Thursday after a nearly 3-1/2-month break, and is expected be fully operational by the end of this month, the transportation minister said.

The airport had been shut since Sept. 1 as it has been repeatedly targeted by shelling and air strikes blamed on eastern forces led by Khalifa Haftar, who have been trying to take control of city since April.

After the closure of the airport, located by the sea in an eastern suburb of the city, all flights to Tripoli were diverted to the coastal city of Misrata, some 200 km to the east of the capital.

Workers are still carrying out maintenance work inside the main departure terminal and car park. The work is expected to end this month.

Two of Libya’s four air carriers operated two flights on Thursday morning. They were bound for Turkey and Tunisia.

“The flights took off on time and services were available,” said transport minister Milad Matoq, who led a tour of the airport with other officials.

“We have committed to the specified date … as you have seen,” Matoq told reporters. “There are some shortcomings that did not affect the operating movement today.”

One more flight to Tunisia is scheduled for the evening. Libyans mainly fly to Tunisia for the medical services there.

After the destruction of Tripoli International Airport in 2014 in a civil war between armed groups vying for power, Mitiga became the area’s only airport, running domestic and international flights.

A new departure terminal will be completed during the first quarter of the new year, Matoq said.

Lutfi Al-Tabeeb, the airport’s director, said domestic flights to Benghazi in eastern Libya, Ghat and Tamanhint in the southern part of the country will be gradually resumed within two weeks.

Al-Tabeeb said flights from Mitiga had to be resumed “to lift the burden on citizens from travelling in long distances out of Libya.”

In October, the U.N. said it planned to open its own terminal at Mitiga that will be used by diplomatic missions and voluntary flights.

Libya has been engulfed in a power struggle since the overthrow of Muammar Gaddafi in a NATO-backed uprising in 2011.