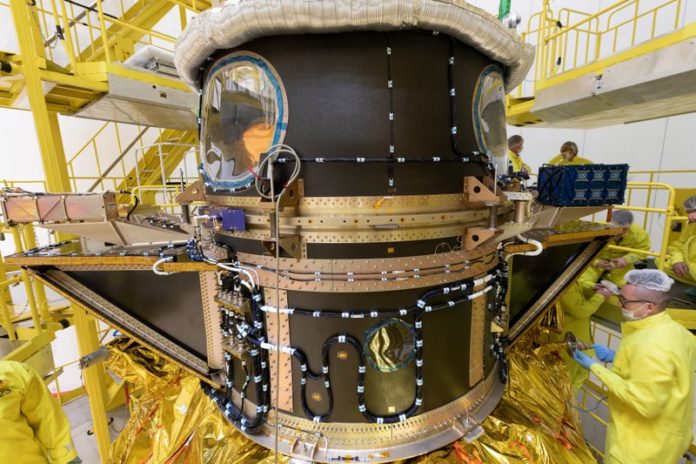 SAN JUAN, Puerto Rico (AP) — European space officials on Tuesday postponed the launch of a three-year mission to study planets in other solar systems shortly before it was due to blast off.

The European Space Agency announced that the launch from Kourou, French Guiana, of the Characterising ExOPlanets Satellite  (CHEOPS) mission would be delayed by at least a day. It had been scheduled for 0854 GMT (3:54 a.m. EST).

ESA Director of Science Guenther Hasinger tweeted that “a software error in the Fregat upper stage” of the Soyuz rocket was responsible for the postponement.

“With this complex mission, we will not take any risks,” he added, advising people to “keep fingers crossed for (a launch) tomorrow” at the same time.

Europe’s Arianespace, which has been operating Russian Soyuz rockets from Kourou since 2011, said during the countdown that “the Soyuz launcher’s automated sequence was interrupted at 1 hour 25 minutes before liftoff.” The launcher was put into a safe standby mode, it added.

“The new target launch date will be announced as soon as possible,” the agency said in a statement.

The mission will focus on 100 of the more than 4,000 extrasolar planets — ones beyond our own solar system — discovered so far, partly to determine if there’s a possibility of an Earth-like planet capable of sustaining life, Swiss astronomer and Nobel Physics Prize winner Didier Queloz, who heads the CHEOPS science team, told The Associated Press.

“We are one planetary system among many,” he said. “It’s all about our place in the universe and trying to understand it.”

A space telescope will analyze the exoplanets’ densities and radii and determine whether they have atmospheres, Queloz said.

“We know nothing, except that they are there,” he said.

Once in place, the telescope will focus on bright stars to determine the size of exoplanets as they pass in front of their host star.