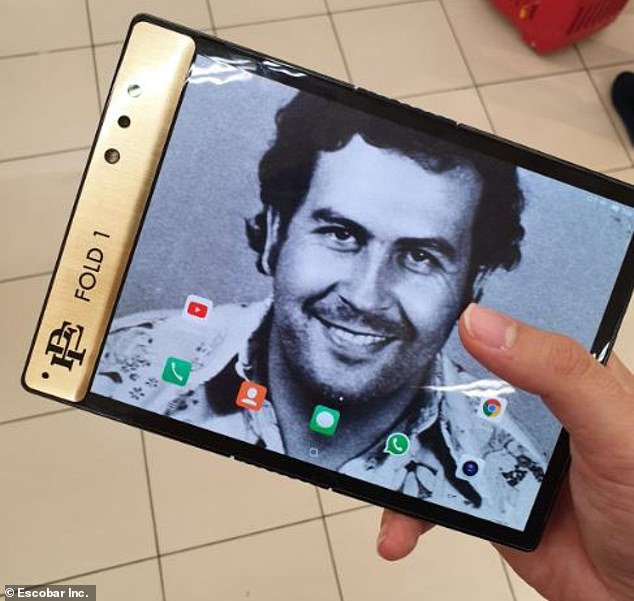 The brother of an infamous Colombian drug lord has waged a war against Apple with a new foldable smartphone.

A new foldable phone for just $349

All foldable phones that we have seen so far are priced at $1500 and above. The Escobar Fold 1, however, retails for just $349, and this includes free shipping and a case as well. With such a price, it is even cheaper than most of the non-foldable flagship smartphones currently available in the market.

The primary reason Roberto Escobar was able to attain such a low price was by eliminating the middleman, like networks and retailers. Moreover, the handset will be sold unlocked, meaning it would work on all networks worldwide.

The overall design of the phone is different from the Galaxy Fold. However, it looks very similar to the Royole FlexPai, which came even before the launch of the Galaxy Fold.

This is not the first time Pablo Escobar’s brother has been attracted to the limelight. Earlier this year, Roberto Escobar came up with a flamethrower, which he claims to have inspired Elon Musk to release a viral product, Not a Flamethrower.

Similar to Huawei Mate X, the Escobar Fold 1 can be unfolded into a tablet with a 7.8-inch display. There is no information on the screen size when the phone is folded. It features an AMOLED display with a 4:3 aspect ratio and an FHD+ resolution.

The Escobar Fold 1 runs on Android 9.0 and features an Octa-Core 2.8Ghz Qualcomm Snapdragon 855 CPU. It is equipped with two cameras, 16 and 20 megapixels, and has dual SIM slots. The 20MP camera works as the front, as well as, the rear camera. Moreover, there is a dual-LED flash with optical image stabilization.

Other features include a fingerprint sensor and a dual nano-SIM card slot. The handset features a 4,000mAh battery, USB Type-C port and supports 25W fast charging. The smartphone comes with 6GB or 8GB of RAM and supports up to 256GB storage via an external memory slot. Overall dimensions of the phone are 134 mm x 190.35 mm x 7.6mm, while it weighs just 320 grams.

Plans to take on Apple

It may appear that by launching a new foldable phone, Roberto Escobar aims to take on the likes of Samsung and Huawei. This, however, is not true as he is actually after Apple.

“I have told many people that I would beat Apple and I will. … This is my goal, to beat Apple, and by doing it myself like I always have,” Escobar told Digital Trends.

One of the Fold 1 commercials even pokes fun at Apple. “Apple Boy Steve once looked into space…he saw Pablo Escobar with a phone beyond anybody’s imagination,” the commercial says.

Roberto Escobar not only wants to beat Apple by launching a mass-market product, but plans to file a class-action lawsuit against Apple as well. Referring to Apple as “scammers,” he says that the company has been cheating users by offering “worthless” and “overpriced” phones. Further, he said that before suing Apple he wants to prove to the world that his phone is much better.

Roberto Escobar even revealed the date his lawyers would file the class-action lawsuit. According to him, they will file the $30 billion lawsuit on January 6, 2020 in the courts of California. Escobar wants Apple to return some “of their illegal profits” back to the people. To ensure that this happens, Roberto says he has already spent about $1 million on lawyers.

How is Escobar Fold 1 different from others?

Roberto Escobar seems confident that his new foldable phone won’t face any of the issues that plagued the Galaxy Fold. The phone uses a “special plastic” that makes it harder to break.

“My phone cannot break, because I did not have to make a glass screen like Samsung,” Escobar told Digital Trends. “Our screen is made of a special type of plastic, and we still have the best resolution. Our special plastic is very difficult to break.”

Moreover, the phone is touted to be more secure than those from Samsung and Apple. As per Escobar, phones from Apple and Samsung are “100% open to all governments in the world.”

“Folding is nice, but also, we have special security on the phone. This makes it very difficult for anyone to scan the phone both [for] near-person communications like Bluetooth, and also for governments to access the devices,” he says.

Initially, 100,000 units of Escobar Fold 1 would be available for sale. The handset is available in two variants – 128GB costing $349 and 512GB costing $499. You can order the phone directly from Escobar’s website.

Roberto Escobar claims it to be the best smartphone in the world, and predicts it will “sell out fast.”