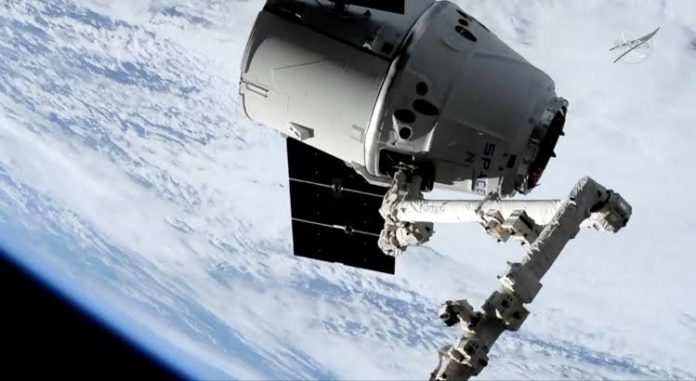 (IANS) A Dragon cargo spacecraft belonging to private space services company SpaceX delivered its payload to the International Space Station (ISS), providing the crew with 2,587 kilos of supplies, including materials, such as mice, worms and a robot, for scientific research.

ISS commander Luca Parmitano, of Italy, and other astronauts used a large robotic arm to “capture” the capsule on Sunday and bring it close to the space station for unloading, a NASA video showed.

“I would like to congratulate all of the people in Houston and around the world who contributed to the launch, navigation, and capture of Dragon,” Parmitano, of the European Space Agency, said.

The Dragon capsule was launched into space on December 5 by a SpaceX Falcon 9 rocket that took off from Launch Pad 40 in Cape Canaveral, Florida.

“Whenever we welcome a new vehicle on board, we take on board also a little piece of the soul of everyone that contributed to the project. So, welcome on board,” Parmitano said.

This is the 19th resupply mission to the ISS carried out by SpaceX under a contract with NASA.

The payload carried by the Dragon will be used in a series of scientific experiments on muscle and bone loss in space, the growing of barley in a weightless environment and the way fire spreads, among others.

SpaceX said the Dragon will leave the ISS in about 30 days and return to Earth, splashing down in the Pacific Ocean, where teams from the company, which is owned by billionaire entrepreneur Elon Musk, will recover the spacecraft for reuse in future missions.