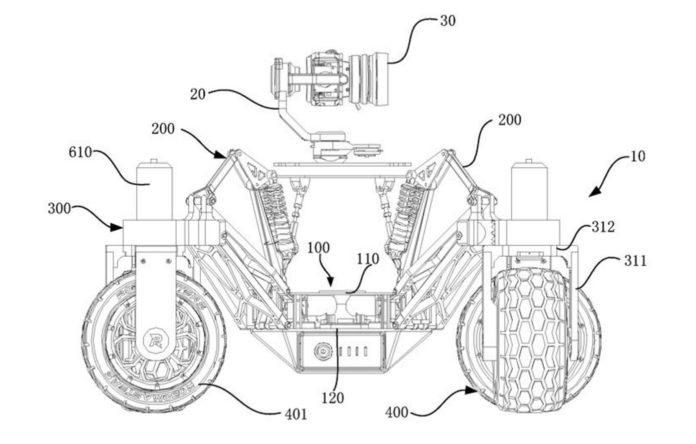 DJI is easily the leading brand when it comes to camera drones, but few companies have even attempted a ground-based mobile camera platform. The company may be moving in that direction, though, if this patent for a small off-road vehicle with a stabilised camera is any indication.

The Chinese patent, first noted by DroneDJ, shows a rather serious-looking vehicle platform with chunky tires and a stabilised camera gimbal. As you can see in the image above, the camera mount is protected against shock by springs and pneumatics, which would no doubt react actively to sudden movements.

The image is no simple sketch like those you sometimes see of notional products and “just in case” patents — this looks like a fleshed-out mechanical drawing of a real device. Of course, that doesn’t mean it’s coming to market at all, let alone any time soon. But it does suggest that DJI’s engineers have dedicated real time and effort to making this thing a reality.

Why have a “drone” on the ground when there are perfectly good ones for the air? Battery life, for one. Drones can only be airborne for a short time, even less when they’re carrying decent cameras and lenses. A ground-based drone could operate for far longer — though naturally from a rather lower vantage.

Perhaps more importantly, however, a wheeled drone makes sense in places where an aerial one doesn’t. Do you really want to fly a drone through narrow hallways in security sweeps, or in your own home? And what about areas where you might encounter people? It would be better not to have to land and take off constantly for safety’s sake.

It’s likely that DJI has done its homework and knows that there are plenty of niches to which they could extend if they diversified their offerings a bit. And like so many situations where drones have become commonplace, we’ll all think of these robot-powered industries as obvious in retrospect. For instance, the winner of our Startup Battlefield at Disrupt Berlin, Scaled Robotics, which does painstaking automated inspections of construction sites.

In fact DJI already makes a ground-based robotic platform, the RoboMaster S1. This is more of an educational toy, but may have served as a test bed for technologies the company hopes to apply elsewhere.

Whether this little vehicle ever sees the light of day or not, it does make one think seriously about the possibility of a wheeled camera platform doing serious work around the home or office.