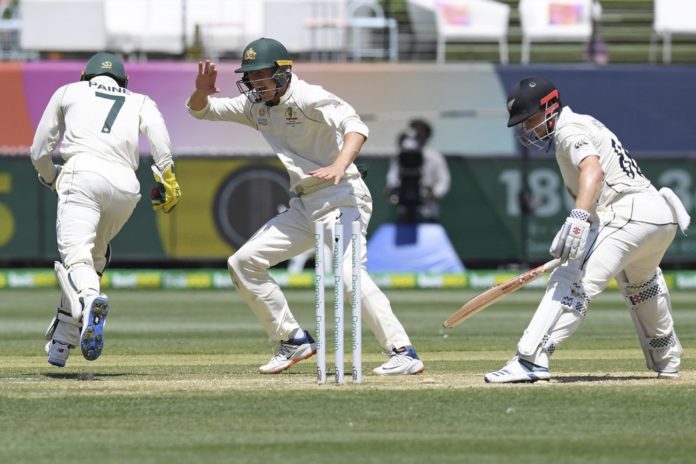 MELBOURNE, Australia — It was New Zealand captain Kane Williamson’s turn to be puzzled by cricket’s Decision-Review System (DRS) after he was given out leg-before wicket in the second test against Australia on Sunday.

Williamson’s dismissal for a duck helped trigger a top-order collapse as New Zealand lost three wickets for three runs to be 35-3, before being bowled out for 240 and crashing to a 247-run loss at the Melbourne Cricket Ground.

The Virtual Eye ball-tracking technology indicated the delivery from Australia’s James Pattinson was going to just clip Williamson’s stumps, which meant the original decision would not be overturned.

In Australia captain Tim Paine’s case on Friday, umpire Marais Erasmus ruled against an appeal for lbw. However, Williamson called for a DRS and it showed the ball was hitting the pad in line with the stumps, much to Paine’s dismay.

“Sometimes you get a bit frustrated,” Paine said.

But Paine acknowledged that the dismissal of Williamson was another case where the departing batsman could feel a little disappointed.

“Today we might have got one that went our way. That’s how it works,” Paine said.

Paine said the technology had its good points and he would certainly not like to return to the days of relying solely on the on-field umpires.

“I know they are trying to get it as precise as they possibly can,” Paine said. “But I think as an aid to help the umpires get the correct decision, it’s good.”

Like Paine, Williamson aims to put the controversial decision behind him.

“It’s not 100 percent accurate. You’d like to think that overall the technology does increase the amount of right decisions,” Williamson said. “Whether you feel that you are unlucky or not, you still pretty much live with them and try to learn and just keep improving. That’s the focus for me and kind of always is, to move on.”

Williamson is the No. 3-ranked batsman in test cricket, but has scored only 57 runs in the first two tests of the series against Australia.

Paine said keeping Williamson in the field for long periods was all part of the plan to tire him out and put him under pressure.

“We’re bowling really well to him at the moment,” Paine said. “We want to wear opposition players down.”