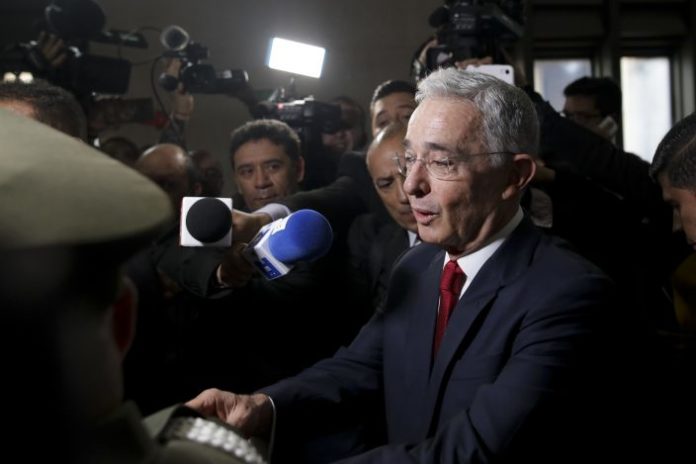 The ex-chief of state testified behind closed doors before the National Electoral Council, emerging nearly two hours later to declare that there is “not a single proof” that any unethical conduct took place during the presidential contest.

“I’ve kept silent for three years,” Santos said. “Three years in which all types of lies have been spoken. I kept my silence to not politicize justice.”

Colombia’s electoral authority is conducting a preliminary investigation but has not filed any charges against Santos, who is widely known for signing a 2016 peace accord with leftist rebels ending Latin America’s longest-running conflict.

Scores of politicians across Latin America have been investigated, forced to resign or otherwise disgraced in the aftermath of the Odebrecht corruption scandal. The company admitted in a U.S. Justice Department plea agreement to paying some $800 million in bribes to politicians in exchange for lucrative public works contracts.

The accusations against Santos stem from testimony provided by Andrés Sanmiguel, who claims his logistics company was used to funnel nearly $1.2 million from Odebrecht for the second round of the president’s re-election campaign.

Sanmiguel made the accusations in testimony to Colombia’s chief prosecutor’s office that was subsequently leaked to a local radio station.

On Wednesday, Santos denied knowing or having any relationship with Sanmiguel and others identified as being involved in the alleged plot, characterizing the accusations as part of a larger political witch-hunt aimed at staining his legacy.

“There is not a single proof that puts into question my good name,” he said.

The Odebrecht graft scandal has ended the careers of some of Latin America’s highest-profile political leaders, shedding light on rampant corruption that has infuriated citizens and fueled protests in several countries over the last year.

In Peru, nearly every living former president is under investigation in connection with the Odebrecht probe. In contrast, Colombia’s most powerful politicians have remained largely unscathed, in what some analysts contend is a signal that institutions charged with holding leaders accountable remain politicized.

Santos led Colombia from 2010 to 2018, a period during which his administration led negotiations and signed a landmark agreement with the former Revolutionary Armed Forces of Colombia.

The conflict between leftist rebels, paramilitaries and the state resulted in at least 250,000 dead, 60,000 missing and millions displaced.

Santos won the 2016 Nobel Peace Prize for his efforts to end Colombia’s conflict, though the accord remains polemic and has had a rocky implementation. In recent weeks, thousands have taken to Colombia’s streets, protesting against current President Iván Duque and alleging that he hasn’t done enough to fulfill the accord’s commitments.

Muñoz Yi said even though Santos is not facing formal charges the mere accusations and leaked audios are damaging to his legacy.