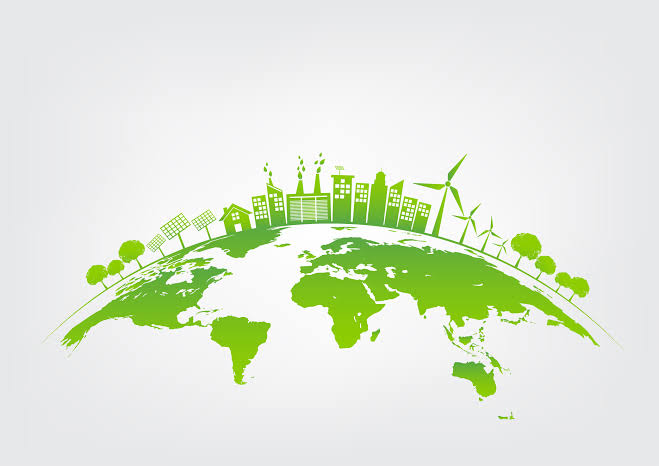 Carbon neutrality, or having a net zero carbon footprint, refers to achieving net zero carbon dioxide emissions by balancing carbon emissions with carbon removal (often through carbon offsetting) or simply eliminating carbon emissions altogether (the transition to the “post-carbon economy”). It is used in the context of carbon dioxide-releasing processes associated with transportation, energy production, agriculture, and industrial processes. Carbon-neutral status can be achieved in two ways:

The concept may be extended to include other greenhouse gases (GHGs) measured in terms of their carbon dioxide equivalence. The phrase was the New Oxford American Dictionary’s Word of the Year for 2006. The term climate neutral reflects the broader inclusiveness of other greenhouse gases in climate change, even if CO2 is the most abundant. The terms are used interchangeably throughout this article.

Biofuels are carbon neutral, even though burning them releases CO2. How can this be? Well, the carbon in the biofuel comes from photosynthesis, where CO2 is captured from the atmosphere by a plant and turned into glucose. The glucose can then be turned into more complicated molecules such as sugars, starches, oils and proteins. Sugars and starches can easily be converted into bioethanol, while oils can be converted into biodiesel. Carbon is removed from the atmosphere, stored in plants for a few months, then released when the biofuel is burned. For every gram of CO2 released by burning a biofuel, there was a gram removed from the atmosphere by photosynthesis just a few months ago. This perfect balance is why biofuels are carbon neutral.

Currently, virtually all forms of carbon neutral energy actually involve the burning of fossil fuels. The crops for biofuels are harvested using machinery that burns fossil diesel. This is because fossil fuels are a great deal cheaper than biofuels. Some ways of producing biofuels are controversial because so much fossil fuel has to be used in the production process. Some sources of bioethanol are in this grey area. Solar cells, wind and hydroelectric turbines are all produced and transported using fossil fuels to some extent. The technology exists to make these things truly carbon neutral, but it is hopelessly uneconomic at this time. Nuclear power involves the burning of fossil fuels in the mining and transport of uranium, the building of power stations, and the disposal of waste. When uranium becomes scarce, mining it will consume even more fossil fuels.

Sometimes companies plant trees to offset the CO2 released by burning fossil fuels. This is not truly carbon neutral. Fossil carbon is being released into the atmosphere, and locking it up in trees is a very short term measure. To be truly carbon neutral, the carbon would have to be locked up for millions of years. Trees only live for tens or hundreds of years, after which they decay or are burned, releasing the carbon back to the atmosphere. We have no way of knowing whether people in the future will be able to keep replanting trees to keep the carbon locked up.

Scientists are trying ways to lock up carbon on a long term basis. This is called sequestration, and most experiments involve pumping carbon compounds such as CO2 into old oil wells or coal mines. This would genuinely make fossil fuels carbon neutral, but it is questionable whether enough carbon could ever be stored to offset fossil fuel use.

In summary, moving to a genuinely carbon neutral society will take time. It may take government tax breaks to make biofuels and alternative energy economically viable. People can take steps towards being carbon neutral by using biofuels and alternative energy. Where it is impossible to avoid fossil fuels, people can focus on efficiency to reduce their fossil fuel use to a bare minimum, and switch to biofuels when they become available. This will move them closer to the ideal of having no net effect on the amount of carbon in the biosphere, in other words, to be carbon neutral.