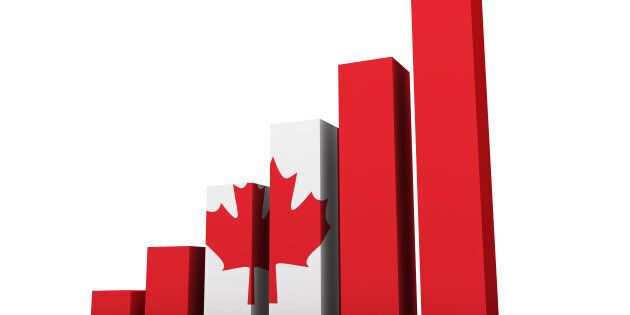 Canada’s economy slowed sharply in the third quarter, as a drop in exports and draw down in business inventories masked a rebound in domestic demand.

Gross domestic product grew at an annualized pace of 1.3% in the three months ended September, in line with economist estimates, Statistics Canada reported Friday. That was down from a revised 3.5% pace in the previous quarter that was largely seen as unsustainable. The period also ended as expected, with a monthly expansion of 0.1% in September.

While the slowdown last quarter marks a return to sluggish growth for the Canadian economy, the details of the report should provide some optimism about underlying strength domestically, even in the face of a weak trade sector, aided by a relatively robust jobs market and a rebound in housing.

Non-residential business investment also surprised — given the global trade uncertainties — with spending on non-residential structures and machinery up 9.5%. That fully recouped a drop in the second quarter.

The end result was a 3.2% increase in overall domestic demand, fully rebounding from a very weak second quarter when consumption slowed and investment contracted. These underlying details should give Bank of Canada policy makers pause about cutting rates to counter an expected slowdown.

Swaps trading suggests investors are placing a two-thirds chance of a rate cut in the first half of next year. The Canadian dollar pared losses after the report, and was trading at C$1.33 per U.S. dollar at 8:39 a.m. in Toronto trading.

The “hearty” gains in final domestic demand will “for now reinforce the Bank of Canada’s view that they have rates low enough to offset the drag from weak external markets,” Avery Shenfeld, chief economist at Canadian Imperial Bank of Commerce, said in a note to investors. “Overall, a mixed bag, but perhaps a bit better than it looks in the headline given the strength in domestic demand.”

The Bank of Canada, whose next rate decision is Dec. 4, had forecast growth of 1.3% annualized for the third and fourth quarters this year, before the expansion picks up a bit in 2020.

Another bit of good news was upward historical revisions by Statistics Canada to gross domestic product that showed the economy was slightly larger than initially estimated last year. This suggests there was less slack in the economy than previously thought, one less reason for the Bank of Canada to cut.

At the same time, fewer inventories will ease worries that stockpiles had grown too large, posing a risk to future growth.

Exports dropped at an annualized pace of 1.5% in the third quarter, falling for a third time in the past four quarters.

Households also seem to be repairing their balance sheets, with the country’s savings rate jumping to the highest since 2015 in the third quarter.

“The rebound in capex is a pleasant surprise but we doubt it can be sustained,” said Jimmy Jean, a strategist in the fixed-income group at Desjardins Capital Markets in Montreal. “What this implies is that the BoC will remain on alert for further deterioration, both globally and domestically.’’