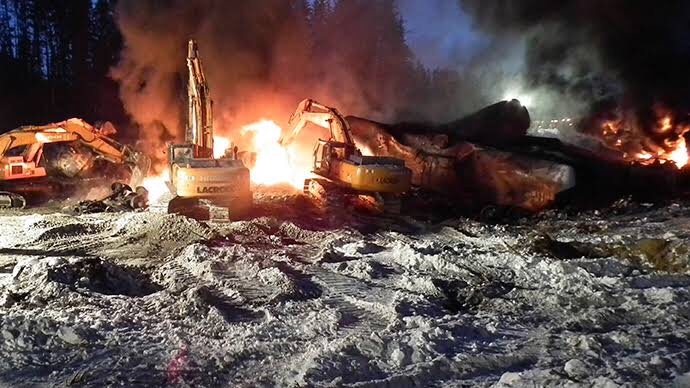 (Reuters) – A Canadian Pacific Railway train hauling oil derailed west of Guernsey, Saskatchewan, early on Monday, spilling crude and causing a fire that was expected to burn into a second night.

The train derailed around midnight in the western Canadian province, and an initial assessment indicated the accident did not affect any waterways, CP spokesman Andy Cummings said in a statement. He did not estimate the volume of crude the train was carrying or the magnitude of any spill.

Highway 16, a national highway, was still closed by midafternoon due to thick smoke from the fire, King said. A Reuters witness said the smoke was easily visible some 20 km (12 miles) away.

The Saskatchewan Public Safety Agency said in a midafternoon statement that the focus was on suppressing fire that would likely burn for another eight to 10 hours. The agency said some cleanup of spilled oil had begun.

One home was evacuated and some derailed cars were being removed.

On social media, a Saskatchewan resident whose home is near the derailment, posted video during the night of towering fire and smoke from a blaze that stretched wide enough to encompass a dozen or more rail cars. Saskatchewan’s environment agency was monitoring air quality but did not issue any advisories, the safety agency said.

Canada is the world’s fourth-largest crude oil producer, and shippers have moved more oil by train in the past year due to full pipelines.

Canadian Transport Minister Marc Garneau wrote in a tweet that he was following the derailment’s aftermath closely and would prioritize safety. The Transportation Safety Board of Canada (TSB) said it had deployed investigators to the site to assess the incident.