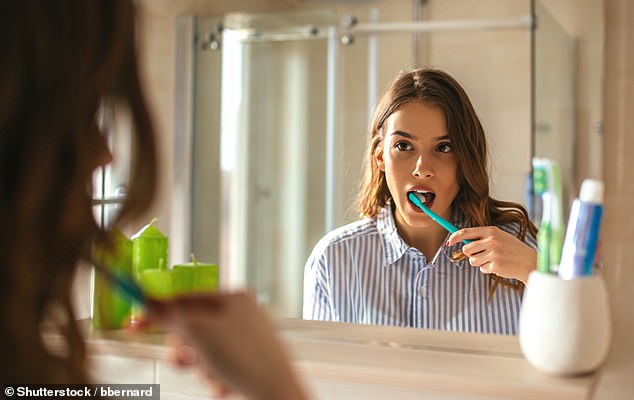 Brushing your teeth at least three times a day could lower the risk of heart failure by more than 10 per cent, a major study has found.

Researchers linked it to a lower risk of heart failure and atrial fibrillation, a condition that causes an irregular heart rate. It is thought that frequent brushing reduces bacteria living between the teeth and gums, preventing it entering the bloodstream.

Scientists in South Korea examined the connection between oral hygiene and heart problems in the study of 161,000 people aged between 40 and 79. They had a routine medical examination between 2003 and 2004.

By the time of a follow-up ten years later, around 5 per cent had developed heart failure and three per cent atrial fibrillation.

Brushing three or more times a day was associated with a 12 per cent lower risk of heart failure and a 10 per cent reduced risk of atrial fibrillation.

Scientists in South Korea composed the study which included 161,000 people aged between 40 and 79. The findings were independent of factors including age, sex, financial status, regular exercise, alcohol consumption and body mass index. Other studies have shown that poor oral hygiene leads to bacteria in the blood, causing inflammation in the body.

This increases the risk of an irregular beat and heart failure. The heart’s ability to pump blood or relax and fill with blood is impaired.  Senior study author Dr Tae-Jin Song, of Ewha Woman’s University in Seoul, said: ‘We studied a large group over a long period, which adds strength to our findings.’

The research was published in the European Journal of Preventive Cardiology.