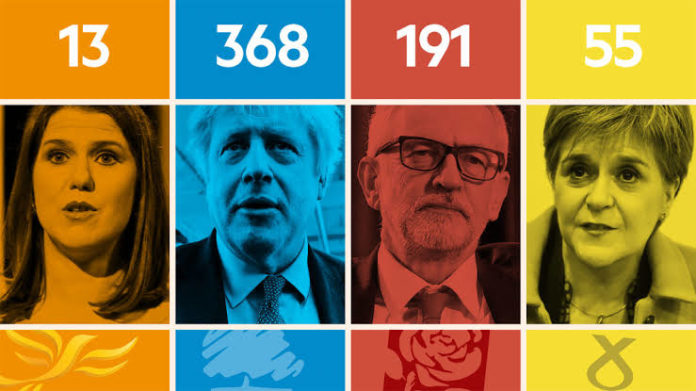 LONDON (Reuters) – Sterling surged more than 2% against the dollar and the euro on Thursday as traders piled into the pound after an exit poll indicated Prime Minister Boris Johnson’s Conservative Party would win a majority of 86 seats in Britain’s election.

The British currency had been rallying in recent days as investors grew confident of a Conservative Party majority, but the scale of the victory suggested by the exit poll sparked a huge rally in the pound. Versus the euro, sterling touched levels last seen in July 2016 shortly after the Brexit referendum.

“Sterling has moved aggressively. I would anticipate we would get a decent rise in UK equities in the morning too,” said Peter Kinsella, Global Head of FX Strategy at UBP.

He said the move was a “relief rally” that the Labour Party under Jeremy Corbyn was highly unlikely to win and because of the size of the majority the Conservatives now looked set to claim.

The pound could move towards $1.37 in the coming weeks as investors who have long underowned UK assets return, Kinsella added.