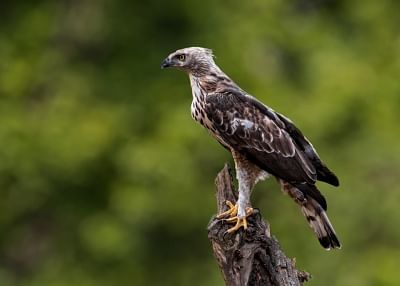 With the number of active bird-watchers increasing annually in India, the question remains why country’s enlightened folks are forced to remain dependent upon books and field guides produced by overseas experts?

A related question is raised to the domestic ornithological organisations undertaking avian studies have not come up with texts comparable to those available in overseas markets, on Indian bird species.

Such probing issues are being raised by both forest department’s officials, who administer all conservation reserves in the country and yet are described as not being able to identify birds, mammals, reptiles, amphibians etc. Also by wildlife experts who trek such reserves to explore more and receive almost nothing in return from foresters in lieu of their entry fee paid by each one of them.

Loud and clear, there is a shortage of published stuff on Indian species — nearly 450 mammals, and only Tiger or Leopard or Lion receiving proverbial lion’s share in texts as well. Almost 1,280 bird species dot the country’s landscape, and nearly two-thirds of them are residents here and they breed within the country. Rest of them are assessed as migratory species breeding in other countries to migrate annually to India.

Despite a nation-wide dearth of handbook or field guide on Indian birds, interestingly some states have tried to bridge the gap. Delhi happened to be the first territory which came up with a check-list of birds of this metropolis.

Usha Ganguli did it. Maharaj Samar Singh Dungarpur, a former IAS and ancestrally deep-rooted in conservation, subsequently gave tips to it. He also brought out a handbook on birds of India International Centre (IIC), an effort unparalleled elsewhere for such elite rendezvous. He did one on trees of IIC as well.

Kerala, Karnataka, Maharashtra are among states that have books on birds of each state. More may be in pipeline.

Haryana has created a niche by introducing a new book during concluding months of 2019 — Birds of Haryana, a field guide.

Scripted by three authors, Rajiv Kalsi, Suresh Kumar and Janak R. Choudhary, it lists 530 species of birds within 600 pages. Each species has been featured on a page along with stunning colour photographs to let readers identify the species. Art paper and fine binding, the size is to fit a pocket.

With a month-wise bar-diagram, the authors have outlined the occurrence of each species, migratory or resident, a unique system adopted. Convincingly, they have done a map of Haryana to showcase significant bird habitats. Analysis reveals Morni Hills and Kalesar forest regimes draw many Himalayan bird species as altitudinal migrants in Haryana. Such areas can be compared to bird reserves like Corbett and adjoining Nainital, which are popular.

Rajiv Kalsi, a zoology professor at Seth Mukundlal College at Yamuna Nagar, Haryana, appreciates the contribution made by several birders, some having provided wonderful photographs as well, as portrayed here. “No support from anywhere in doing this book but we are happy to offer a genuine field guide,” he sums up.

Suresh Kumar, the co-author, has been cited as a fierce though humble bird watcher, and would probably be credited for having made Bhindawas as a popular bird habitat, which then had come up as news for rest of the country. Rakesh Ahlawat, based at Dighal near Jhajjar, is another devout and is able to identify any bird in flight. He has listed some new species for Haryana, which they call as ”lifer.”

What is Rajasthan doing?

Supported by Chief Wildlife Warden, Arindam Tomar, the 22nd Indian Birding Fair featured all 80+ wader species of birds found in the Indian subcontinent. A publication was brought out citing fieldwork done by R.G. Soni, former chief of the forest, and Harkirat Singh Sangha, an ace birder. It also contained names in Sanskrit and in Hindi for all species!

“A separate bird book on Rajasthan is being worked out but we are short of funds” pointed out Harsh Vardhan. He is held as author-architect of Indian Birding Fair, staged at Jaipur”s 400-year-old Man Sagar lake. Its 23rd edition is poised to be held early February 2020 — to be dedicated to Indian Bustard species.

The Great Indian Bustard (Ardeotis nigriceps) has been bred in recent months in the desert national park to set a world record – its number had declined to about 150 across the world! Experts from Wildlife Institute of India, Dehradun, and from Abu Dhabi based Houbara Breeding Centre were entrusted with this challenging task, by Tomar, Chief Wildlife Warden, Rajasthan.

It happened through the cooperation of all interested ones and in fact, there is so much to do for conservation of country’s natural resources — his succinct brief to IANS.