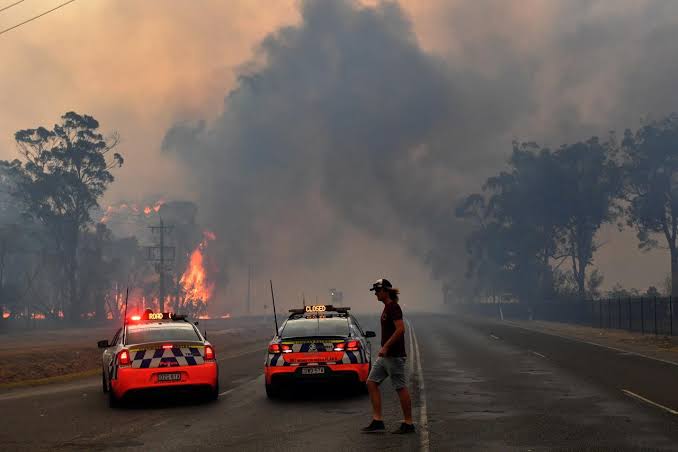 SYDNEY – Two volunteer Australian firefighters died on Thursday night in the battle against blazes around Sydney, prompting Prime Minister Scott Morrison to cut short a vacation to return to the drought-ravaged country.

Thousands of firefighters have been deployed to try and extinguish the flames. A fire truck hit a tree and rolled over just to the south of Sydney, killing the driver and a front passenger, police said. Three other passengers survived with injuries.

“This is an absolutely devastating event in what has already been an incredibly difficult day and fire season,” the Rural Fire Service said in a statement.

Earlier three other firefighters were engulfed by flames as fierce winds fueled bushfires across the state of New South Wales. Two men were airlifted to hospital with burns to their faces, arms and legs, while a female colleague was taken by ambulance to hospital.

Morrison issued a statement on Friday morning saying he would be returning to Sydney as soon as could be arranged.

He has weathered a storm of criticism on social media in recent days for going on an overseas holiday during the emergency, adding to criticism that his government is failing to deliver adequate climate change policies.

“I deeply regret any offense caused to any of the many Australians affected by the terrible bushfires by my taking leave with family at this time,” Morrison said.

His office had initially refused to confirm media reports he was vacationing in Hawaii. About 500 protesters had gathered outside his official Sydney residence on Thursday to demand urgent action on climate change.

The casualties came as record-breaking heat and drought stoked over a 100 bushfires across NSW, with three massive blazes lapping at the outskirts of Sydney itself.

A southern change brought relatively cooler conditions on Friday, after the mercury topped 40 degrees Celsius (104°F) the day before, but the Bureau of Meteorology warned the scorching heat would return on Saturday.

“There will be severe to extreme heat-wave conditions, deteriorating air quality and gusty wind changes which will lead to dangerous fire conditions once again,” the Bureau said.

Sydney was blanketed in smoke on Thursday as bushfires burnt out of control to the south, west and north of the harborside city, shrouding the Opera House and emptying beaches.