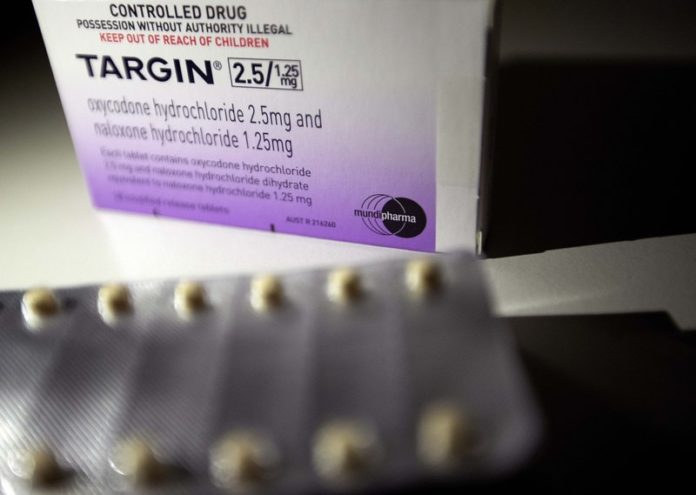 SYDNEY (— Australia’s drug regulator has fined a pharmaceutical company owned by the billionaire Sackler family over what it dubbed misleading advertising for one of its opioid painkillers, as the country grapples with surging rates of opioid prescriptions and related deaths.

Mundipharma Australia, the international affiliate of OxyContin maker Purdue Pharma, was ordered to pay penalties of 302,400 Australian dollars ($209,000) by the Therapeutic Goods Administration over its promotion of the opioid Targin, the drug regulator said in a statement.

The fine against Mundipharma comes as Purdue faces a barrage of lawsuits in the United States accusing it of deceptive marketing tactics that downplayed the addictive nature of its opioids.

In a statement last week, the TGA said it had issued 24 infringement notices against Mundipharma after determining that its advertising of Targin to health professionals “was misleading, imbalanced and otherwise inaccurate,” and thus breached the drug promotion requirements set out in the code of conduct by industry regulator Medicines Australia.

In Australia, drug companies are banned from directly advertising to consumers, though they are free to market their drugs to medical professionals — provided they abide by the code of conduct.

The TGA found fault with a sentence that appeared in the promotional materials that said: “Opioids should be used as part of multimodal pain management plan and in an ongoing trial, as they are associated with potential harms, including unsanctioned use, addiction and overdose.”

The TGA said the sentence “appeared to positively encourage the prescription of Targin medicines for chronic non-cancer pain.”

“The TGA considers that opioids should not be represented as a core component of the multi-modal management of chronic non-cancer pain, and the decision to prescribe opioids should be approached with significant caution,” the agency said.

Mundipharma Australia said it “respectfully disagrees” with the TGA’s assessment of the sentence, which the company said is no longer in use.

“Mundipharma’s intent with this statement was to proactively and voluntarily urge caution when healthcare professionals chose to prescribe an opioid, and to clarify that this should only be considered in specific circumstances and as part of an overall treatment program if deemed appropriate by healthcare professionals,” the company said in a statement.

The sentence the TGA found fault with appeared in various Targin materials, and separate infringement notices were issued for each instance.

“Mundipharma has comprehensive and robust systems and processes in place to ensure that all our materials and claims are supported by strong medical evidence and scientific guidelines and are in full compliance with all applicable laws and industry standards,” the company said.

Dr. Simon Holliday, an Australian addiction specialist, first complained about the marketing pamphlet for Targin in 2018. He initially filed a complaint with Medicines Australia. But membership to Medicines Australia is not mandatory, and Mundipharma declined to participate in the complaints process because it had dropped out as a member. Holliday then went to the TGA and got nowhere. So he wrote to the health minister and other lawmakers. He received no response.

Earlier this year, the Royal Australian College of General Practitioners also complained to the TGA about the pamphlet.

Asked why it took so long to take action, the TGA told the AP in an emailed response that it assessed Holliday’s initial complaint in 2018 “and considered it to be a low priority” for several reasons, including that health professionals have the expertise to critically appraise advertising materials. Because of that, it did not launch an investigation into the ad. After the complaint received media attention earlier this year, the TGA decided to investigate, the agency said.

“Additional time was needed for TGA to get advice from Medicines Australia as well as facilitate two face to face meetings with Mundipharma as part of ensuring they received natural justice,” the agency told the AP.

Holliday said he was happy to have called attention to the issue, which he hopes becomes part of a broader discussion related to big pharma’s influence over health care — from the way the drugs are marketed to the money drug companies spend on medical conferences and influential research papers.

“We’ve got to look at the big picture about how does business and health services interact,” Holliday said. “There’s this covert — or overt — manipulation of the way healthcare is being developed, and I really do think we need to be thinking about that.”