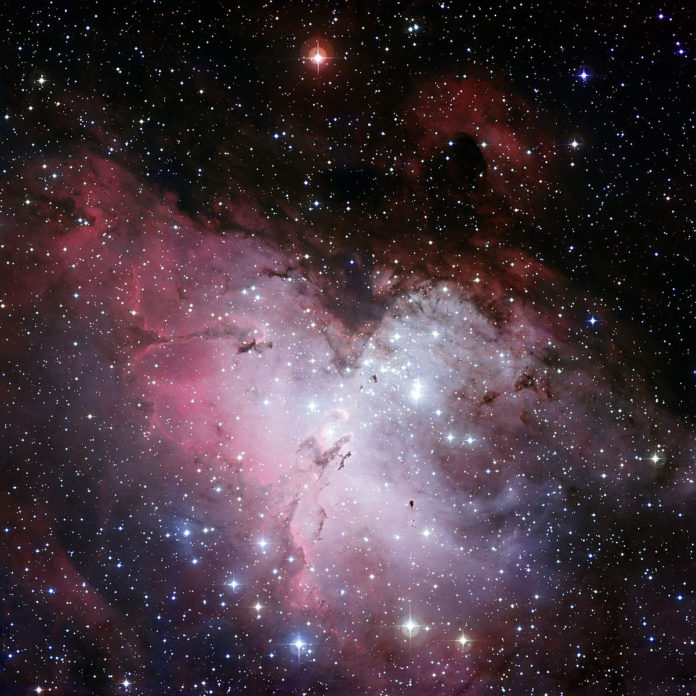 The Eagle Nebula, associated with open star cluster M16 of the Milky Way, was named for its dramatic similarity to the appearance of an eagle. Located 7000 light years from Earth, it is a component of the constellation Serpens (for Serpent). It was discovered in 1746 by P.L. de Cheseaux but it was not until twenty years later that the famous astronomer Charles Messier discovered it nebulosity. Not naked to the naked eye, it can be seen under the power of a low-to-moderate power telescope.

The Eagle Nebula is what is categorized as an emission nebula. An emission nebula is created when electrons are stripped away from molecules through the process of ionization and then recombine with protons emitting quanta of light. Usually the photons emitted lie in the red end of the spectrum creating a red-looking nebula. This is largely true for the Eagle Nebula with much of its glory being due to a brilliant display of red colors in addition to blue and white light. The Eagle Nebula is a heavenly wonder.

The source of the ionization in emission nebula is energetic ultraviolet light created from hot stars shining on a cloud of hydrogen gas. In the case of the Eagle Nebula, the ultraviolet energy comes from the blue and white stars of the M16 cluster. These stars are interesting in that they are only approximately two million years old compared with our own sun’s age of four billion year. However, they are considerably heavier which is responsible for the shortening their lifetime to the order of a few million years.

The resemblance of an eagle is due to the presence of three tall dark pillars of EGG’s, or evaporating gas globules. EGG’s are composed of hydrogen gas and dust and are so dense that their constituents actually condense under the force of gravity to form new stars. These pillars are light years in length. The dust referred to absorbs much of the pillars’ light, giving it a dark appearance. These dust particles are not like ordinary household dust due to being both microscopic and asymmetrical in shape. Very little is known about them, as they have never been viewed first hand. However this interstellar dust makes up a large component of the universe.

Although somewhat complicated, the scientific origin of the Eagle Nebula is both rich and fascinating. The nebula itself is breathtaking, and any chance to view it should be undertaken if at all possible. There are many different types of classifications of nebulas with as many different visible manifestations as the number of identifiable nebulas themselves. Many beautiful images of the Eagle Nebula have been captured by the Hubble telescope. They’re beautiful and mystical to say the least.