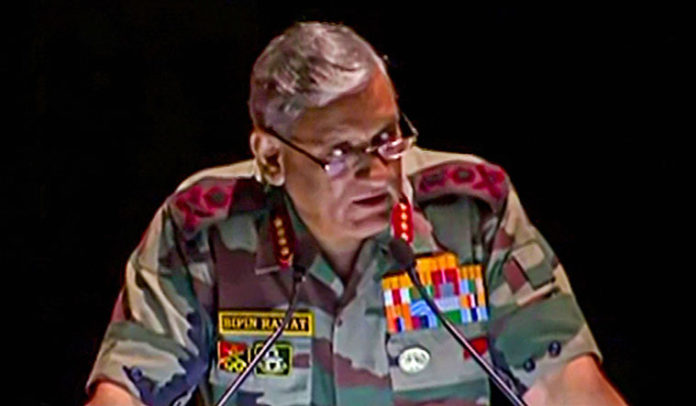 Delivering the inaugural Manohar Parrikar Memorial Lecture here, Rawat also said that India’s response to terror attacks in Uri and Pulwama was much more “robust” compared to “inaction” after the 2008 Mumbai terror attack.

“Threats are becoming complex day by day, and it is important that we adopt a `whole of nation’ approach and every citizen must be involved in national security,” he said.

National security was no longer the domain of security forces alone, he said.

“Weapon systems have become lethal. You have to look at getting victory in a short time if you don’t want your people to suffer maximum damage.

“To achieve victory in a shorter time, we need leaner and meaner force which will inflict maximum damage on the adversary in a faster time frame and achieve the objective of victory,” Gen Rawat said.

“Political objectives can also be met before international pressures come on to you to go in for ceasefire,” he added.

The country’s defense forces have transitioned from “balancing to leveraging power”, he said, pointing out that the response to Uri and Pulwama terror attacks was “significantly robust as against our inaction after 26/11 (Mumbai terror attack)”.

“In recent times we have proved that for far too long we were punching far below our weight,” he said.

At the same time, “there is a need to temper military ambitions with the size of our economy and budgetary allocations,” he cautioned.

Maintenance of “strategic balance” is our key priority, he said, adding that strategic foreign policy objectives are being achieved “with smart levering of military pressure points often without a shot being fired”.

“We will continue to act and not react,” the Army chief said, referring to responses to provocations on the border with Pakistan.

“We should have the largest army in terms of technology innovation,” he further said.

Batting for a holistic approach, he said: “all three services will have to integrate along with the national resources if you have to win victory through quick combat”.