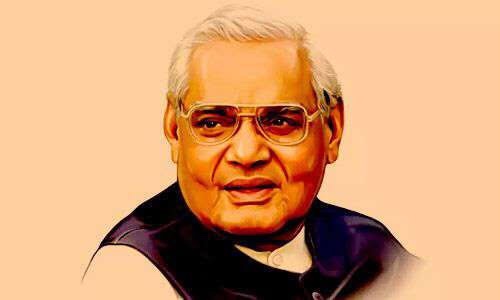 Atal Bihari Vajpayee (25 December 1924– 16 August 2018) was an Indian politician, statesman and a poet who served three terms as the Prime Minister of India, first for a term of 13 days in 1996, then for a period of 13 months from 1998 to 1999, and finally, for a full term from 1999 to 2004. A member of the Bharatiya Janata Party (BJP), he was the first Indian prime minister who was not a member of the Indian National Congress party to have served a full five-year term in office. An orator par excellence, he was lauded as a statesman politician who would go far beyond his party’s core political agenda for the greater good.

Vajpayee started his political career as a freedom fighter, his first brush with politics being as part of the Quit India movement of 1942. Later, it was the ideology of the Nationalist Group Rashtriya Swayamsevak Sangh (RSS) that appealed to him. He joined the RSS as a volunteer in 1930. In 1947, Vajpayee started working as a journalist for newspapers of Deendayal Upadhyaya — Rashtradharma (a Hindi monthly), Panchjanya (a Hindi weekly) and the dailies Swadesh and Veer Arjun. Later, influenced by Syama Prasad Mookerjee, Vajpayee joined the Bharatiya Jana Sangh in 1951.

His journey in electoral politics began in 1957, when he contested the Lok Sabha elections from three seats and was elected from Uttar Pradesh’s Balrampur constituency. Vajpayee took oath as a member of Parliament that year and impressed then prime minister Jawaharlal Nehru with his excellent oratory skills. Nehru predicted that Vajpayee would become India’s prime minister someday.

Vajpayee was made the national president of the Jana Sangh in 1968 after the death of Deendayal Upadhyaya. In the years that followed, he worked with Lal Krishna Advani, Nanaji Deshmukh and Balraj Madhok to make Jana Sangh’s presence in Indian politics more prominent.

Vajpayee spent months in prison when Indira Gandhi imposed Emergency in June 1975. He, along with Advani and Bhairon Singh Shekhawat founded the Bharatiya Janata Party (BJP) in 1980 and was appointed its first president.

In the 1984 elections, after the assassination of the then PM Indira Gandhi, BJP managed to win only two seats in the 545-member Lok Sabha. This defeat hit Vajpayee particularly hard. Lal Krishna Advani and Atal Bihari Vajpayee together worked tirelessly to build the party; in the next parliamentary elections, in 1989, the BJP won 88 seats.

Vajpayee served three terms as the prime minister. His first term in 1996 lasted only 13 days. Then from 1998 to 1999 he was the prime minister for 13 months. Finally, from 1999 to 2004, he successfully served for a full term of five years. He became the first non-Congress Indian prime minister to serve a full five-year term in office.

The Atal Bihari Vajpayee-led National Democratic Alliance (NDA) was in power at the Centre during the time the Kargil War was fought. India’s victory bolstered Vajpayee’s image, and he was praised for supporting the armed forces and clearly articulating India’s stand at the world stage. His polices drove India into the new millennium with pride. After the war, he was elected the prime minister for a third time. This term made Vajpayee India’s first non-Congress prime minister to last a full five-year term. When he failed to return to power after the 2004 general elections, it practically marked the end of his long and eventful political career. A year later, he left active politics.

Vajpayee suffered a stroke in 2009 which impaired his speech. He also suffered from dementia and long-term diabetes. On June 11, 2018, he was admitted to New Delhi’s All India Institute of Medical Sciences (AIIMS) with kidney and urinary infection and chest congestion. On August 16 the same year, he passed away at 93. Vajpayee was cremated with full state honours at Rashtriya Smriti Sthal near Raj Ghat. His pyre was lit by his foster daughter Namita Kaul Bhattacharya. Thousands of people paid their respects during his funeral procession. A seven-day state mourning was announced by the central government throughout India. The national flag flew half-mast during this period.