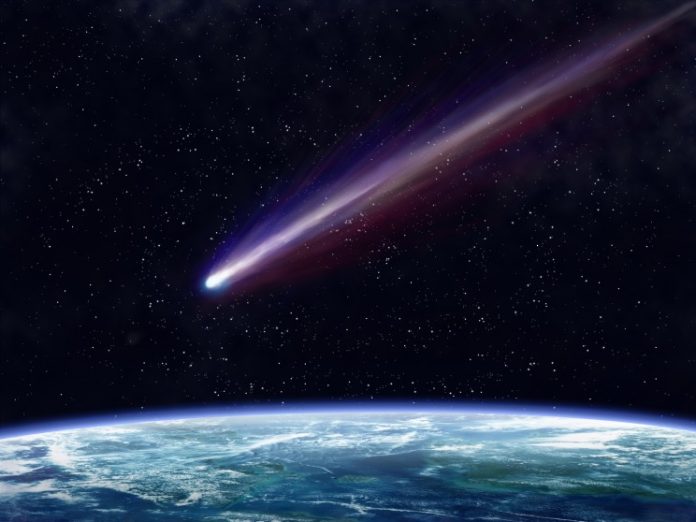 Roughly 12,800 years ago, planet Earth went through a brief cold snap that was unrelated to any ice age. For years, there have been geologists that have argued that this period was caused by an airburst or meteor fragments (known as the Younger Dryas Impact Theory). This event is believed to have caused widespread destruction and the demise of the Clovis culture in North American.

This theory has remained controversial since it was first proposed. However, an international team of scientists recently discovered geological evidence in South America that could settle the debate. As the latest indication of an impact that took place during the Younger Dryas Boundary (YDB) period, this crater indicates that the effects of this event may have been more widespread than previously thought.

The paper that describes the team’s findings recently appeared in the journal Science Reports. The team was led by Chilean paleontologist Mario Pino and included multiple geologists from Chile and the United States, as well as James Kennett — the professor emeritus of geology at UC Santa Barbara. As they indicate in their study, this latest impact crater was found in the Osorno province in southern Chile.

As Kennett noted in a recent article in The Current (a university press maintained by UCSB), the crater would have led to widespread destruction, characterized by biomass burning, megafaunal extinctions, and global cooling. “It’s much more extreme than I ever thought when I started this work,” he said. “The more work that has been done, the more extreme it seems.”

The discovery was made possible by a Chilean group of scientists who were studying sediment layers at the well-known Quaternary paleontological and archaeological site, known as Pilauco Bajo. Years ago, these scientists recognized changes in the sediment record that were associated with the YDB impact event.

These included a “black mat” layer that coincides with the disappearance of South American megafauna fossils and human artifacts dated to the Pleistocene (12,800 years ago), indicating a severe shift in the climate. This was a major find since the vast majority of evidence for the YDB Impact has been found in the northern hemisphere.

This includes a previous discovery made by Kennett and another team of geologists, who uncovered a very young impact crater measuring 31 kilometers (19.25 miles) in diameter beneath the Greenland ice sheet. As he explained, this latest discovery adds to the overall weight of evidence for the impact theory:

“We have identified the YDB layer at high latitudes in the Southern Hemisphere at near 41 degrees south, close to the tip of South America. This is a major expansion of the extent of the YDB event… Because the sequencing of these events looked like what had already been described in the YDB papers for North America and Western Europe, the group decided to run analyses of impact-related proxies in search of the YDB layer.”

This analysis revealed the presence of microscopic tiny spheres (spherules) of minerals that were reasoned to have formed in the presence of extremely high temperatures. The layers containing these spherules also showed high concentrations of platinum, gold, and iron particles that are rarely found in nature.

Even more surprising was the unusual presence of chromium, an element not found in any of the Northern Hemisphere YDB impact spherules. This coincides with what has been found in volcanic rocks sourced to the Andes, which indicates that the cometary objects associated with that impact must have hit in that part of South America as well.

Other evidence that Pino and his team considered had to do with indications of environmental disruption in South America that were dated to the same period. These included micro-charcoal and pollen samples in the impact layer that was indicative of a large biomass burning event — the largest that had been seen in thousands of years, in fact.

All of this indicates that there was an abrupt and major shift in the climate. However, unlike what occurred in the Northern Hemisphere, where the climate became suddenly cold and wet, conditions at Pilauco rapidly became warm and dry. An impact that took place in many spots across the globe would explain this “seesaw” effect between zonal climatic belts.

The speed at which this change took place is also best explained by an impact, rather than slower oceanic processes. An impact is also a more likely explanation for how large animals native to South America during the Pleistocene era — like giant ground sloths, sabretooth cats, mammoths, and gomphotheres — went extinct.

It would also explain why fossilized samples of human bones and artifacts in the impact layer — which are similar to those attributed to the Clovis culture in North America — declined very suddenly. But as Kennett explained, the most impressive thing about this find is the distance between it and the closet well-studied site in South America — about 6,000 kilometers (3730 miles) away — which greatly expands the extent of the YDB impact event:

“This is further evidence that the Younger Dryas climatic onset is an extreme global event, with major consequences on animal life and human life at the time. And this Pilauco section is consistent with that.”