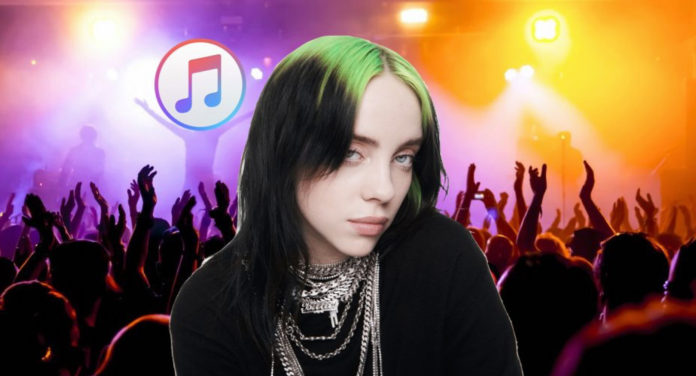 As music streaming apps struggle to differentiate, Apple is making concert video a more central part of its strategy with tonight’s big Billie Eilish show at its HQ’s Steve Jobs Theater. The Apple Music Awards concert will be streaming live and then on-demand to Apple Music’s 60 million subscribers. Apple would like to do more of these streamed concerts in the near future.

Beyond the concert streaming, Apple is looking to strengthen its perception as an ally to art and artists. Given Apple Music is just a tiny fraction of the iPhone maker’s massive revenues, it can look overly corporate and capitalistic compared to music-only competitors like Spotify that some see as more aligned with the success of musicians.

To grow its subscriber count amongst serious listeners and earn points with creators, Apple Music can’t look like it’s just designed to sell more Apple hardware. So tonight Apple is hoping to show its respect for artists, handing out its first Apple Music Awards. Billie Eilish has won artist of the year and Songwriter Of The Year (with her brother Finneas), while Lizzo is taking home Breakthrough Artist Of The Year. Additionally, based on Apple Music streaming counts, Eilish’s ‘When We All Fall Asleep, Where Do We Go?” has won Album Of The Year, and Lil Was X’s ‘Old Town Road’ is the Song Of The Year.

The award statues themselves are specially-crafted Apple artifacts, featuring overwrought design like you see in those WWDC videos of robots making gadgets. They start with a single 12-inch disc of nanometer-level flat silicon wafer — the same kind used to power Apple’s iPhones. Copper layers are patterned with ultraviolet lithography to etch connections between the billions of transistors on the wafer. It’s then sliced into hundreds of individual chips and lined up during the months-long process to create a reflective trophy suspended between glass and anodized aluminum. In what’s sure to become a kooky collector’s item, each award is packaged with its own special Apple spirit level and mounting screws for classy installation.

The hope seems to be that both the winners and their fellow artists will come away with the perception that Apple truly cares about music. That, plus Apple Music’s scale, could help convince them to share more links to their songs on the streaming service and feature their profile there ahead of their presences on competing listening apps.

On the concert front, Apple started holding its yearly Apple Music Festival, formerly the iTunes Festival, back in 2007. But after a blow-out 10th year where Apple streamed shows from Britney Spears, Elton John, and Chance the Rapper, it discontinued the event in 2017. Apple Music launched a dedicated Music Videos tab last year, but has done less recently with concert streaming other than a few events with Tyler, The Creator and Shawn Mendes. These concert videos can be tough to find inside Apple Music.

Yet this represents a massive opportunity for Apple. Across music streaming services, catalogs are becoming more uniform, everyone is copying each other’s personalized playlists and discovery mechanisms, and many are embracing radio and podcasts. Meanwhile, paying for exclusive music or whole artists has fallen out of fashion compared to a few years ago. Fragmenting the music catalog is hostile towards listeners, can be harmful for artists who lose out on mass distribution, and it can engender backlash from artists fans’ who don’t want to pay for multiple redundant streaming services.

Streaming concert videos, which typically aren’t available beyond shaky camera phone footage, feel additive to the music ecosystem. If platforms are willing to pay to shoot and produce the videos, they can be powerful differentiators. And if the recorded shows look unique from the typical tours, as with the tree-covered stage for tonight’s Billie Eilish show at Apple headquarters, they keep fans glued to their screens. Video viewing can lead users to develop more affinity for whichever company is broadcasting the shows compared to multi-tasking while they merely listen to a generic app.

Apple is already ahead of competitors like Spotify that do very little on the concert video front. Streaming more shows like tonight’s could help it better rival YouTube  Music, which integrates traditional music streaming with a broad array of rarities, music videos, and streamed concerts like Coachella. Apple is also fortunate to have a global retail and office footprint that could help it throw and record more shows with fewer logistical headaches.

To date, Apple Music has leaned on its pre-installations on the company’s phones, tablets, and computers plus its free trial system to drive growth. But if it can spot holes in the industry’s content offering, leverage its deep pockets to invest in premium video, and prove to artists that it cares, Apple Music could build a brand separate from and with more street cred than Apple itself.