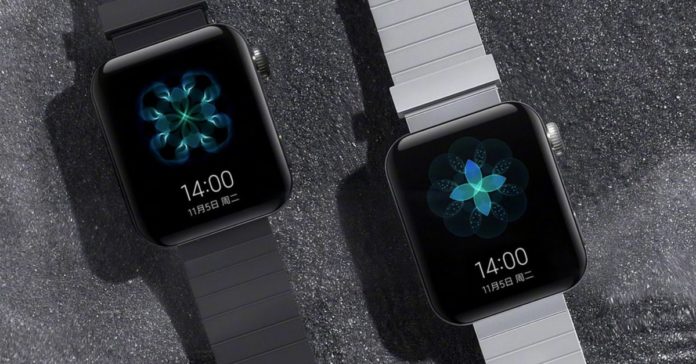 (IANS) Chinese smartphone manufacturer Xiaomi has recently released some images of its upcoming smartwatch on its official Weibo account and the device looks similar to the design of the Apple Watch.

The upcoming Xiaomi smartwatch features an almost-identical rectangular touchscreen face with rounded corners and a look-alike rotating ridged crown button for scrolling, which is also located above a similar-looking pill-shaped button on the right side of the watch, The Verge reported recently.

Although the Xiaomi watch‘s face is a little thicker and less rounded than the Apple Watch Series 5 and the straps are not as sleek, the report added.

According to rumors, there will be support for WiFi, GPS, NFC as well as an eSIM. The Watch to have fitness tracking capabilities, onboard music, and video player.

The watch will be powered by the latest Snapdragon Wear 3100 chipset, which is said to bring the right mix of performance and efficiency.

Additionally, the device might also come with Watch OS. The speculation is based on a Wear OS app update that was spotted under the moniker “Xiaomi Mi Watch“.

The company is expected to hold an event on November 5 in China where it may unveil its 108 MP camera smartphone – Mi CC9 Pro and Mi Watch.

How to Bring your Golf Game into the 21st Century

Google One is among world’s first ioXt-certified apps