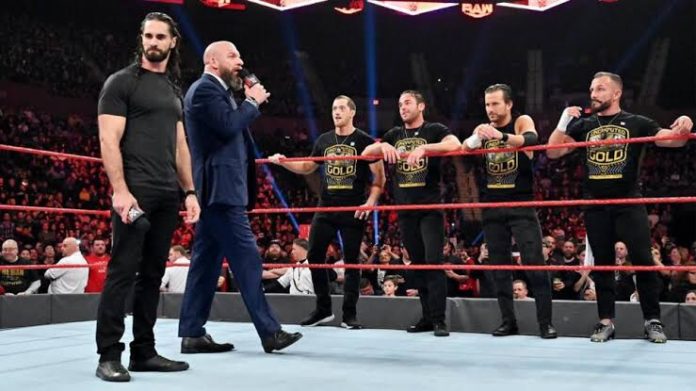 Here are the full results of the November 4th, 2019 edition of Monday Night RAW.

We start by seeing a series of vehicles entering the backstage area. Triple H is here, and he speaks to an unknown figure in a closed vehicle behind him.

In the ring, out comes Brock Lesnar and Paul Heyman. Heyman says Lesnar has come to hunt Mysterio down, and states that since WWE has a substantial investment in Brock Lesnar and that he’s too valuable. He has leverage and is special, which is why he can’t be traded and is entitled to do what he wants.

Heyman says Lesnar is better than all of us and all the bitches in the back that are fake tough guys. Someone knows where Mysterio is, so where is he? Tonight is Rey Mysterio’s career funeral, and Lesnar will flip over the entire Nassau Colisseum like an F5 tornado until he is found. The two leave.

Backstage, Lesnar asks someone by catering here he is vigorously before slamming him to the floor. Back from commercial, Lesnar asks another person, and he directs him to a car nearby. He breaks a car door and drags someone out from the back seat. He continues his search.

The Kabuki Warriors vs. Charlotte and Natalya

Charlotte is able to cut off Kairi Sane with a speare, and Natalya is able to reverse the Asuka lock into the Sharpshooter and Asuka is forced to tap out.

Heyman and Lesnar come back out immediately after the match and they ask where Mysterio is. Paul asks Jerry where Mysterio is, and he says that if he doesn’t tell Brock, no one will be able to revive him when he dies on the air again. Lesnar gets closer, but Dio Maddin gets up and in his face. Lesnar sends him through the announcer’s table with an F5.

After that, Rey Mysterio comes out and assaults Lesnar with a bat multiple times to his leg. He finishes the assault by striking him with the WWE Title belt, and he walks away. Lesnar lies on the floor. During commercial, we see Lesnar limping heavily.

Backstage, Mysterio tells Lesnar an eye for an eye and a tooth for a tooth. Rey says he’s coming after Lesnar’s WWE Championship, and he dares Brock to answer his challenge for Survivor Series.

Alexander looks for the Neuralizer, but Murphy is able to counter with a sharp knee to Alexander’s back. He follows up with the Murphy’s La, and that finishes everything.

Seth Rollins said it’s been a rough couple of weeks, and he says that he doesn’t care that many people wanted to see him lose to The Fiend. However, what concerns him is that the Universal Title is on SmackDown and Lesnar is back on RAW.

All of the hard work that he’s worked on for the past year to make a world championship mean something for guys like Styles, Strowman and Corbin has gone to waste. Rollins says he doesn’t have the energy to do what he did again, and for the first time in a long time, he doesn’t know what’s next for him.

Out comes Triple H. He talks about their history together, and he says that Rollins’ past is his future and puts over Rollins’ NXT career, The Shield and his WWE Title reign.

Rollins questions is all of those accolades are a product of making Triple H look better, but Triple H says that doesn’t matter because Rollins always emerged as champion in the end. He says that Rollins doesn’t know what’s next, but Triple H does.

He talks about NXT’s invasion of SmackDown, and Rollins mentions half the roster was stuck overseas. Triple H says that NXT set out to make an impression, and he says what Seth does next will affect what Triple H does next. He also says he didn’t come alone and that NXT has something to prove at Survivor Series.

Triple H says he knows how to make Seth great, but he says that he is either with him….and out comes the Undisputed Era from the crowd…or against him. Out comes The OC and they chase off The Undisputed Era.

However, Dominic Dijakovic and Damien Priest comes out and beats them from behind. The Undisputed Era comes out and joins the assault before more RAW recruits comes and chases them away. Seth heads to the back.

Seth Rollins approaches Triple H backstage and he says he succeeded in lighting a fire under him. He says he’s not coming to NXT on Wednesdays as a former Universal Champion, as the top guy. He also says that he’s better than Daniel Bryan and will succeed where he fails. He demands a match with Adam Cole and to make it for the NXT Championship. Triple H welcomes Seth back.

Andrade and Zelina Vega vs. Sin Cara and Carolina

Carolina goes for a powerbomb, but Zelina counters it into a hurricanrana to the corner. Then, Zelina hits another hurricanrana onto Carolina face first on the pavement for the victory.

The OC vs. Humberto Carrillo and The Street Profits is announced for later tonight, and Seth Rollins vs. Adam Cole for the NXT Championship is official.

We get a recap of the Rusev and Bobby Lashley saga.

Rusev comes out to issue a challenge to Lashley. He says Lana is all hers, but his ass is his. Lashley comes out with Lana, and Bobby is on crutches. Bobby says he suffered a torn groin over the weekend, and it wasn’t from rehab or an in-ring injury. He said he tore it in ways that Rusev can only fantasize about.

Lana says someone will have someone step in Bobby’s place, and that man is Drew McIntyre.

Rusev takes the fight to Drew on the outside by the steel steps, but Bobby Lashley runs down the ramp and jumps Rusev for the DQ.

After the match, Rusev and Lashley brawl and Rusev is eventually able to get the advantage. However, Randy Orton comes in and hits an RKO from behind. Then, Ricochet comes out and sends Randy out of the ring with a kick to the face.

Becky Lynch is interviewed backstage, and she is asked about her triple threat match against Bayley and Shayna Baszler at Survivor Series. Lynch says that she’s a target this year, as opposed to being out for retribution last year.

Someone asks Charly to get out of her chair off-screen, and Shayna Baszler comes and takes her seat. She says she’s been wanting to meet Lynch for a long time and that she knows her well. Baszler tells Becky that she’s not Ronda Rousey, and that she will pin her or tap her out at Survivor Series.

Shayna tells her she needs to decide which limb she wants to keep. Becky says that at Survivor Series, she’s coming directly for her, and that picking a fight with her will change her life. She doesn’t know Shayna too well, and doesn’t know if she respects her or should slap the head off of her, but at Survivor Series, she’ll show her who the real baddest woman on the planet is. The two stand up and have a stare down. Shayna says they were glad they could have this chat.

The OC come out, and AJ Styles says that he doesn’t care about NXT, but the next time he sees any one of those punks, they will never leave Orlando, Florida again.

The Street Profits come out and gloat over their victory over The OC two weeks ago.

The OC vs. The Street Profits and Humberto Carrillo

AJ Styles goes for a Phenomenal Forearm, but Carrillo is able to escape. He goes for a dive, but Styles counters that into a powerbomb, and he pins Carrillo with his feet on the ropes for the victory.

The Viking Raiders vs. The Polo Boys

After the match, Erik said that they are bold enough to admit defeat at Crown Jewel and congratulate The OC. Ivar says victory is often nothing more than survival and tell OC to thank the gods because they won one battle, but nothing will stop the raid.

Seth Rollins is preparing for the Curb Stomp, but the Undisputed Era comes out and stops Rollins for the DQ victory.

After the match, both RAW and NXT reinforcements arrive and we get a free-for-all brawl in and outside of the ring. Eventually, Ricochet hits a springboard Shooting Star splash onto the crowd outside. Then, Keith Lee hits a dive of his own onto the outside as RAW goes off the air.