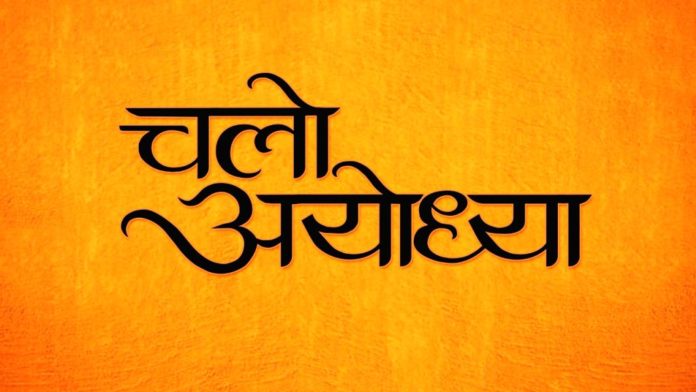 (IANS) A large group of Delhi’s power elite is set to visit Ayodhya on December 14, barely a month after the Supreme Court in a landmark judgment settled the Ayodhya title dispute, once and for all, by giving exclusive rights to Ram Lalla over the disputed land of 2.77 acres. They come from various walks of life but connected with a common thread of taking pride in India’s historical “pride”.

“I am an atheist. I have no reason to pray. But this endeavor is to assert my belief in India”s past and the pride I take in that,” asserted eminent Defense expert Abhijit Ayer-Mitra. The event, which is said to be a collective effort of “like-minded people” involves people from Delhi’s power circuit — TV panelists, social media influencers and BJP members. They will visit Ayodhya, the temple town on December 14 to have a “darshan” of Ram Lalla.

Sources say so far 40 people have expressed their willingness to be a part of it and the number is expected to swell further. The group will reach Ayodhya early morning on December 14 and return a day after.

Vikas Pandey is a software architect by profession and a known social media influencer. He runs ”I support Namo”, an initiative in support of PM Narendra Modi. He too is a part of this entourage. Speaking to IANS, Pandey said, “People are overly excited after the judgment. We will not only do ”darshan” but also there is a provision of aarti in the ghats of the Saryu river. There will also be a visit to the workshop.” Pandey added that the local MP Lallu Singh is also helping the entourage in its plan to visit Ayodhya, which is now called “Chalo Ayodhya”.

Charu Pragya, who is a media panelist of the BJP as well as the National Incharge (Legal) of BJP”s youth Wing will also be a part of “Chalo Ayodhya”. So is Gunja Kapoor, who is a regular on TV chat shows. She too confirmed her participation while speaking to IANS.

This visit comes in the wake of a Constitution Bench led by former Chief Justice of India Ranjan Gogoi making it apparent, the mosque, which was brought down on December 6, 1992, was built upon a structure which was a temple. Based on ASI findings and other supporting documents, the top court settled an age-old dispute.

With the Jamiat Ulama-i-Hind saying it will file a review petition challenging the Supreme Court’s Ayodhya verdict as it is “not based on evidence and logic”, is it also a show of subtle muscle-flexing by people who matter in the power circuit of Delhi? While most would deny drawing that inference, Abhijit Ayer-Mitra smiled to add, “Abhi Kashi Mathura Baki hai (Kashi and Mathura are left)”.