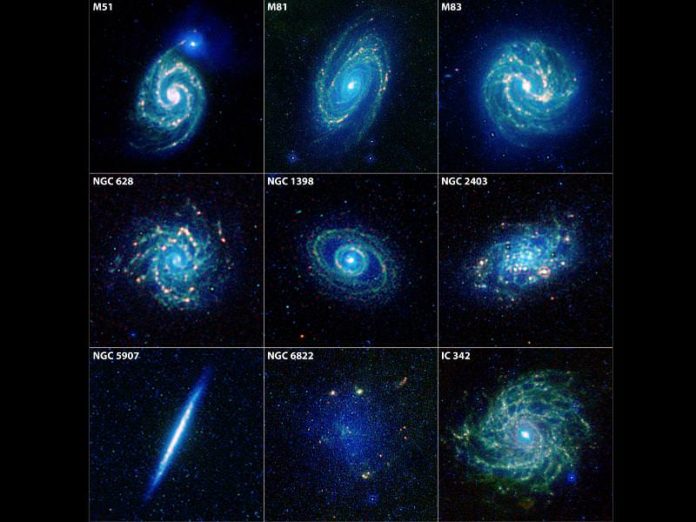 In our universe are four identified types of galaxies. These galaxies are composed of stars, gas and dust held together with gravitational forces. Each galaxy type is named for its shape, making it easy to identify which type of galaxy you are looking at. You may already be familiar with the galaxies: spiral, barred spiral, elliptical and irregular. These fascinating galaxies were each formed from a unique mixture of gases and matter that came together, painting our magnificent galaxies, each one a unique work of artistic beauty.

Each galaxy has its own collection of stars, planets, black holes, neutron stars, moons, nebulae, asteroids, comets, and dark matter. Our galaxy is a barred spiral galaxy and is called the Milky Way. It has large spiral arms with a bulging disk and bar of stars in the center.

Our galaxy, like our solar system, is in constant motion. Our universe is made of different galaxies that are the basic units of the universe. Our universe has a large spectrum of diversity, as some galaxies are extremely complex and others quite simple.

In 1926, Edwin Hubble created a classification scheme of the galaxies. The diagram is shaped like a tuning fork and is commonly called the Hubble Tuning Fork. Hubble placed the different types of galaxies in a logical evolutionary order. The handle of the fork contains the elliptical galaxies, and on the two tines he placed the spiral galaxies. Hubble determined that each type of galaxy had vast variations.

For elliptical galaxies, Hubble assigned values from E0 to E7 with E0 indicating an almost round elliptical, and E7 an elongated cigar shaped elliptical. The last place on the handle is occupied by the first spiral galaxy and is designated S0.

On the top level of Hubble’s tuning fork diagram, he placed spiral galaxies in the order of decreasing bulge and tightness of the arms: the tighter the galaxy, the larger the bugle. The scale assigns values Sa, Sb and Sc, with Sa being the most tightly wound with the largest bugle. On the bottom of the tuning fork handle, Hubble placed the barred spiral galaxies.

Hubble found that certain types of galaxies didn’t fit neatly with his classification: Galaxies, such as dwarf galaxies and large Megellanic Cloud galaxies. Although they are sometimes referred to as giant elliptical, these irregular galaxies are among the smallest in the universe. When diagramming Hubble’s Tuning Fork, the irregular galaxies are placed between the two tines that hold the spiral galaxies. Hubble’s evolutionary theory termed the “a” type galaxies early and those categorized with “c” as late-term. Hubble’s classification scheme is viewed as simplistic today, but is still useful for introducing the basic concepts of the universe.

WHAT IS A GALAXY?

When we define our planet, we consider things such as gravity, the core, the atmosphere,and the surface that is composed of water and land masses. The planet is composed of different types of ecosystems which, depending on their location on our planet and their position in relationship to the sun, range from hot and steamy to bitterly cold and blustery. Just like there are dense populations of people, there are dense populations of stars, and just as our earth is composed of a myriad of materials that are unique to earth, each galaxy is composed of a mix of gas, dust and stars that are unique to that galaxy and held together with gravitational forces.

Although there are many types of galaxies, just as there are different countries, each individual galaxy, like each country, is unique. There are many galaxies that exist in our universe, each one a spectacular collection of star systems and gas. Earth is a planet in our solar system which is found in the Milky Way Galaxy. Over millions of years, a galaxy forms moons, planets, comets, asteroids, stars, dust, nebulae, dark matter, and neutron stars. Black holes also exist in galaxies, a fascinating phenomenon that pull in anything that gets too close.

Space is filled with emptiness, areas where nothing at all is present and galaxies are filled with empty space along with the other elements found in galaxies. Galaxies are in motion, and everything that is in the galaxy revolves around its center, just as our planets revolve around our sun, which is only one of billions found in the universe. In our galaxy, the Milky Way, our solar system’s sun is found on the outer portion of the arm, about 1/4 of the way in and nearly 3/4 from the central bulge.

The movement of all galaxies suggests that at one point in time they were all together at the same place and that something occurred, say like a big bang, which caused the galaxies to move away and have continued on this path for millions of years, moving rapidly away from each other. After many years of studying galaxies, Hubble recognized patterns and created the classification scheme discussed above.

As discussed in the section on galaxy classifications, Hubble found four distinct types of galaxies: elliptical, spiral, spiral barred and irregular. Although there are different types, we also learned that each galaxy contains the same elements, but these are arranged differently for each type. Just as every human is created with the same proteins that are configured uniquely, so are the galaxies uniquely configured with gasses, dust, stars and other elements.

Spiral galaxies are easily identified by observing three components common to all spiral galaxies. A spiral galaxy has a disk, a bulge, and a halo. The center of the galaxy is like a nucleus, containing a sphere shaped bulge that houses old stars and is devoid of dust and gas. The circular shape of the galaxy composes the disk. The arms of the spiral galaxy originate in the disk and are where new stars will form in a galaxy.

The sun in our galaxy is located in one arm and its stars are created in this portion of the galaxy, which contains the most gas in the galaxy. This area is rich in blue stars. The Halo is a spherical shaped collection of old stars and clusters known as globular clusters that is found in the outer edge of the galaxy. This stunning view of Spiral Galaxy Messier 74 from NASA taken with the Hubble telescope shows a bright bulge in the center with the arms spiraling outward.

When a spiral galaxy has no arms, S0, it is termed lenticular. These galaxies are so similar to E7 that identifying them can be tricky. Lenticular galaxies also occur with barred spiral and are classified as SB0. Spiral galaxies are the most common galaxy of the known universe, comprising about 77% of all known galaxies.

Barred spiral galaxies share the same features and functions as regular spiral galaxies, but they also have a bar of bright stars that lie along the center of the bulge, and extend into the disk. The bright bulge has very little activity here and contains mostly older, red stars. The bar and arms have lots of activity.including star formation.

While the classification for barred spirals is the same as it is for regular spiral galaxies, the bar must be considered as well. Short bars correlate to tighter galaxies and will be included in the designation SBa. SBb have longer bars and SBc are the longest. Most astronomers now agree that the Milky Way is a barred spiral galaxy.

Elliptical galaxies can be recognized by their elongated spherical shape and their lack of nucleus or bulge at the center. Although there is no nucleus, the galaxy is still brighter in the center and becomes less bright toward the outer edges of the galaxy. Stars, gases and other materials are spread throughout the elliptical galaxy. An elliptical galaxy can be nearly round or long and cigar shaped.

It is believed that a great deal of the mass in an elliptical galaxy is due to the presence of a central black hole. These galaxies have very little activity and contain mostly old stars of low mass, because there aren’t the gasses and dust needed to form new stars.

Im galaxies occur most often among irregular galaxies and may show a trace of the spiral galaxy arms. IO galaxies are completely random and can be called chaotic in nature. The Magellanic clouds that border our own Milky Way Galaxy are examples of Im galaxies. Approximately 20% of our galaxies are classified as irregular.