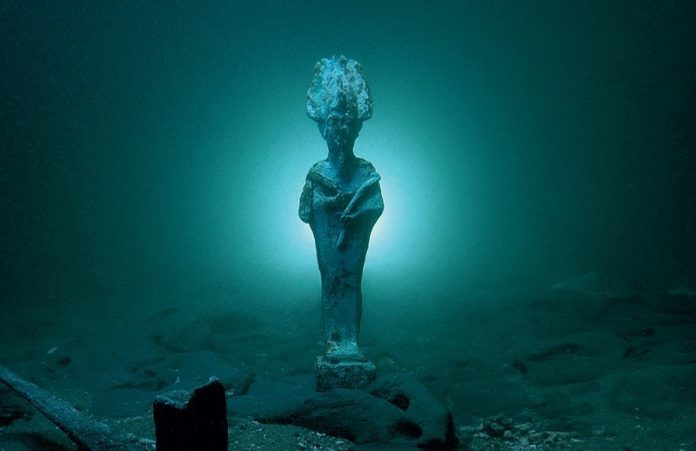 Submerged cities are, by their very nature, baffling to behold, but sometimes these underwater towns are discovered under especially mystifying circumstances. From unexpected scientific encounters with ancient fabled societies to strategically pinpointed subaquatic findings, here are some underwater cities which were found in unexpected, mysterious places.

Archaeologists can’t quite seem to agree on whether the Yonaguni Monument (called the Yonaguni Pyramid, by some) is man-made, or a coincidentally sophisticated construct of nature. If this giant stone monument is a relic of a civilization past, as some suspect, it could be the creation of a complex society of human beings that existed between 5,000 to 10,000 years ago.

The potential ruins were discovered by divers in 1986, near Japan’s Yonaguni Jima island near the Ryukyu tip, and is estimated by those who believe it to be a city structure that sank into the sea after an earthquake around 2,000 years ago. The reason some scientists believe the site is of human design is that it consists of sharp angles in the stones, apparent cascading staircases, and even some potential cultural indicators like animal and character monuments discovered in and around the sizable structure.

Those who believe it’s simply a product of natural governance, however, point to how there are also no discernible seams in the sandstone, which is known to geologists to fragment at sharp angles. For them, this could indicate that even the most convincing edging might have been done by Mother Nature, rather than mankind. There’s also the fact that, given its location near Japan, the timing of its construction would run counter to the small type of human communities that were known to exist at the time.

Until proven otherwise, though, divers who visit the site are consistently impressed by the angular structures of the monument and overwhelmed by the powerful sensation that this is an artificial construction of our ancestors, rather than a naturally developed mountain system that was submerged.

Cleopatra was the last Egyptian pharaoh and ruled the city of Alexandria for two decades from her perch in the city’s fabled island of Antirhodos. However, the site vanished beneath the sea some 14 centuries ago, during a particularly vicious earthquake series. In 1996, it was rediscovered by a dive team led by archaeological explorer Franck Goddio, who used classic Grecian literary descriptions to find the well-preserved site. Once located, Goddio’s team unearthed vast amounts of ancient artifacts that were found lurking in the long-abandoned ruins, including royal statues and sphinxes, jewelry, coins, and other temple pieces.

The impact of the massive discovery is vast, as the site contains a literal treasure trove of antiquities, many of which have not been brought to the surface, so Egypt hopes to capitalize on the international interest in the site by launching an underwater museum wherein visitors could view its sunken city first-hand without disturbing their millennium-plus-old resting place by traveling through strategically positioned underwater tunnels.

A few years after Goddio’s discovery of Antirhodos, another lost Egyptian city was discovered by Goddio and his team. This time, it was Thonis-Heracleion, a city that was fabled by both the Greeks and ancient Egyptians for its status as a grand port of trade between the Mediterranean and the Nile River. The city was home to the Temple of Amun and is thought to have been swallowed by the sea in the 8th century A.D. due to natural disasters and left to live on in legends alone until it was rediscovered in the year 2000. Among the recovered objects from the site were statues, a massive temple, and even ceramic pottery pieces, which supported the long-dormant theory that this city was once the site of much wealth.

Goddio told The Telegraph that his findings proved “It was the port of entry to Egypt, so all trade had to go through the city. Furthermore, it possessed a temple where every pharaoh had to go in order to receive the title of their power, as universal sovereign, from the supreme god Amun. So it was very wealthy.” Goddio also discovered the lost Egyptian city of Canopus, another major port for Greek trade which had been lost to the depths of forgotten literature before he was able to locate it and reintroduce it to the modern world.

One of the world’s oldest sunken cities is Pavlopetri, which lies beneath the Mediterranean Sea near Laconia in Greece and is estimated to be about 5,000 years old. Some believe it may have even been the inspiration for Plato’s mythical Lost City of Atlantis, as it is the first underwater city which predates his myth.

The city was discovered in 1967 by Nicholas Fleming and, later, his team archaeologists from the University of Cambridge. It is considered to be a hugely significant finding for researchers of the Stone and Bronze Ages. “The site is unique in that we have almost the complete town plan, the main streets and domestic buildings, courtyards, rock-cut tombs and what appear to be religious buildings, clearly visible on the seabed,” said Dr. Jon Henderson from the University of Nottingham, who used modern sonar technology to return to the site and map it so thoroughly that his team can now imagine what the city would have looked like in its prime.

So what happened to Pavlopetri to make it such a pristine piece of human history? It is thought to have been submerged in full during an earthquake and/or tsunami, but no matter how it happened, the city went underwater and never reemerged to be reoccupied or rebuilt, so it is perfectly preserved in its original state of antiquity. Residents of the neighboring town of Neapolis had an inkling that something existed beneath the sea, but they had no idea what lay beneath was such a vital piece of the historic puzzle.

What happens when a city is flooded on purpose and then forgotten about? It becomes amazing, that’s what. Commonly known as China’s own Atlantis or the Atlantis of the East, the city of Shicheng was wilfully flooded by the government in 1959, during construction of the Xin’an Dam and the man-made Qiandao Lake in the Zhejiang province, and it was mostly forgotten about until 2001, when officials funded an underwater exploration of the site.

The city, which still boasts architecture from the Ming and Qing dynasties from over 600 years ago, is stunningly well-preserved by the very water which destroyed it. So much so, in fact, that the forgotten drowned town has become a tourist haven for curious divers interested in learning the secrets of this once-bustling political center, from within its watery time capsule.

The name of this lost city of India, Dwarka, means “gateway to Heaven,” so right off the bat there’s some chilling significance to the accidental finding of what may very well be the world’s oldest underwater city. In 2002, scientists happened across an ancient submerged city in India’s Gulf of Cambay while measuring pollution levels in the area, and divers later recovered human artifacts from the site, including beads and pottery, along with human teeth that were reportedly carbon-dated to be as many as 9,500 years old.

The importance of the finding cannot be overstated, according to experts. Per the BBC, one ancient civilization authority said that finding a sunken city of this scale calls into question the long-lived archaeological holding that cities of this scale weren’t known to exist more than 4,500 years ago when Mesopotamia was erected.

The legendary city of Dwarka, which may have sunk as a result of the last ice cap melt nearly 10,000 years ago, is considered sacred to several religions, including Hinduism and Buddhism, and was thought to have been occupied by the Hindu god Krishna when it was considered the capital of the Anarta Kingdom.

Lake Titicaca was the source of much mythology for the ancient Incas, who believed it to be their civilization’s birthplace, so it’s a little auspicious that scientists located a 1,000 to a 1,500-year-old temple that predated them right there in their legendary waters. The Incas believed in the submerged city of Wanaku and claimed to have originated from the lake itself when the Children of the Sun emerged from its waters. According to Bolivian officials, the ruins prove that “our civilizations have left more footprints than we had thought.” Given the perceived aged of the site, experts believe the temple may have been a worship site for the Tiahuanaco, which eventually assimilated into the Inca civilization, so that Children of the Sun myth doesn’t sound so crazy anymore, does it?

Another chance encounter with an amazing ancient underwater civilization happened in 1984, when marine scientists spotted the 7,700-year-old remains of a sunken city during their search for shipwrecks near the Bay of Atlit in Israel. Later explorations revealed that the site contains rectangular houses and a circular stone wall, indicating that Atlit-Yam may be one of the earliest known villages that used agricultural and marine resources to subsist, sometime between the years of 6900 and 6300 B.C. Among the remains discovered at the site were the first confirmed humans to have contracted and died from tuberculosis, the first evidence of olive oil creation, and, most importantly, the first known discovery of a civilization that used situ burials.

The city is believed to have been suddenly abandoned after a volcanic collapse caused a tsunami swell, which led to the evacuation of the town. Atlit-Yam, like so many others of such pre-historic origins, has often been called the “Neolithic Atlantis.”

The Roman city of Baiae was once a home away from home for some of Rome’s most powerful (and controversial) figures, including Julius Caesar, the emperor Caligula, and the philosopher Marcus Cicero. The once-vibrant city existed as something of an elitist pleasure resort of the Gulf of Naples, which included baths and possibly even an ancient variation of a Las Vegas casino. The city was mostly abandoned in the 8th century A.D. after Muslim raiders wrecked the city. It was later completely abandoned, once malaria arrived a few centuries later, and volcanic activity is considered to have sunk the city sometime after it was emptied of its inhabitants.

However, the underwater city was rediscovered in the 1950s by an Italian archaeologist, after its above-water portions were concealed by 15 feet of vine overgrowth. The city is now one of the world’s only official underwater parks and attracts divers who can get up close and personal with an ancient sunken nymphaeum.