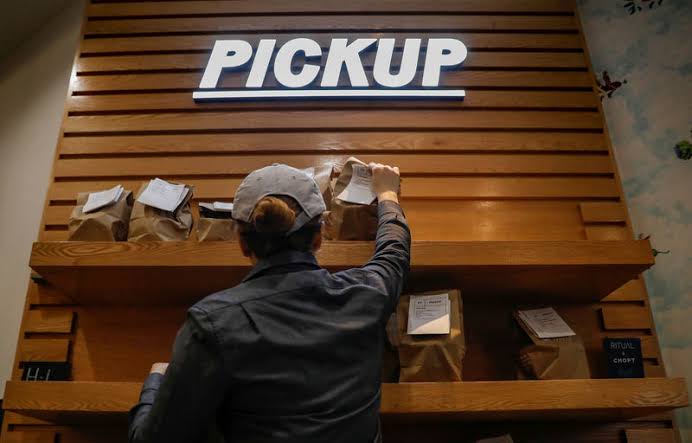 Restaurants are doing away with dining rooms as consumers increasingly order food deliveries through apps such as Uber Technologies Inc’s Uber Eats and GrubHub Inc.

The newest Chopt Creative Salad Co location, which opened Tuesday in New York, is unlike any of the chain’s other 61 sites. It has no cash registers or tables for customers.

Atlanta-based Chick-fil-A Inc has similar sites in Nashville and Louisville, where customers order and prepay online with the option for delivery or pickup.

Chick-fil-A is also trying something different, opening three pilot “delivery kitchens” this year – in Chicago, Los Angeles and near San Francisco. The latter is run by delivery platform DoorDash Inc.

At those sites, the chicken chain shares kitchens with other restaurants to prepare food for delivery only.

Off-premise digital orders are a major growth area for fast-food and fast-casual chains. More are turning to these so-called dark, virtual or ghost kitchens, which can also save labor and real estate costs.

Wendy’s Co said during its Oct. 11 investor day it aimed to open two “dark kitchens” by year’s end in high-delivery markets. Its franchisee in the Dominican Republic opened one there last month.

A Wendy’s spokeswoman said she could not yet disclose locations for its next dark kitchens.

Some delivery-only locations by startups, independents and celebrity chefs in New York and San Francisco have flopped in recent years.

But in January, Uber co-founder Travis Kalanick’s CloudKitchens got a $400 million investment from Saudi Arabia’s sovereign wealth fund, according to a source familiar with the matter. The Wall Street Journal first reported the investment last week.

CloudKitchens, founded in 2016 and based in Los Angeles, builds shared kitchens for delivery-only restaurants to rent. It did not respond to a request for comment.

At the new Chopt location in New York, shelves hold salads ready for pick up, while delivery workers shuttle other orders through the front door. Greeters inside help customers place orders.

In the kitchen, a central prep table stocked with ingredients is flanked by a row of employees on each side who assemble orders.

Privately held Chopt offered pick-up and delivery orders soon after it opened 18 years ago, but today, those orders make up nearly half of its business at larger locations, said Chief Marketing Officer Julie Atkinson.

“We are sensing a really huge customer need for speed, for convenience,” she said. “We’re hopeful that this concept really raises the bar on customer convenience.”

An initial public offering is “an absolute possibility” though not the only course to finance growth, Marsh said.

On Nov. 5, Starbucks Corp opened its first Starbucks Pickup location in the United States for online orders. The midtown Manhattan location is similar to some new Starbucks stores in China, where digital ordering and delivery is more common.