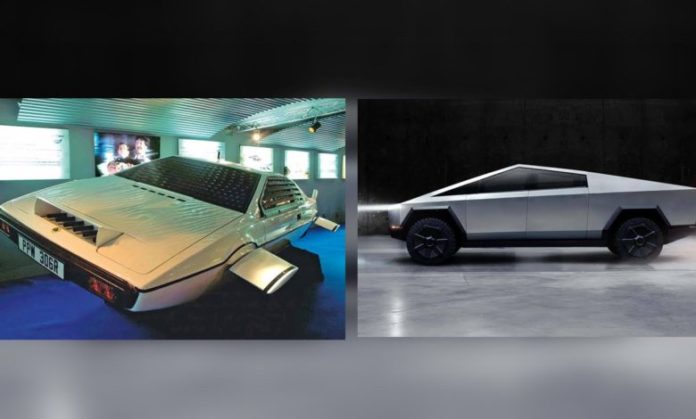 (IANS) After Tesla CEO Elon Musk unveiled his company’s six-seater electric “Cybertruck” starting at a price-tag of $39,900, Twitter fans went into a spin with 71.6K tweets, with many users making fun of the new vehicle.

The Cybertruck is inspired by ”Lotus Esprit S1” from the James Bond film “The Spy Who Loved Me”.

Users posted memes of Musk, cartoon strips and pictures of a family standing near an odd-looking space ship.

One user wrote: “The #Cybertruck looks like it came from a webcomic in 2004”.

Another cheekily remarked: “Telling my kids that this was Lara Croft’s triangular b***s from 1996”.

One user commented: “Damn I gotta get a better graphics card. Tesla #Cybertruck looks like shit at these low render distances.”

A Twitter user posted a picture of what looked like the interior of the new vehicle and wrote: “Got in an accident in my new #Cybertruck. Smashed my face right on the marble fucking countertop…”.

One fan was clearly not amused by the criticism: “I don’t know why everyone is behaving like 6-year olds… I think the #Cybertruck looks good and for sure will be great to own”.