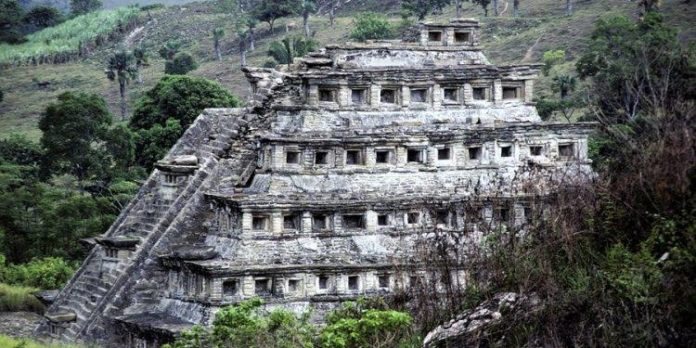 A United Nations World Heritage site and one of the most important archaeological sites in Mexico.

Off the beaten tourist path, in the state of Veracruz near the Gulf of Mexico.

The first sight of the ruins was astonishing. The emerald green of the grass and forest, the textures of the rocks, the soft grayness and coolness of the gentle rain, and the view of several pyramidal structures all combined to caress the eyes and invite exploration. We meandered around the huge site. Over 30 of the more than 160 buildings known to archaeologists have been excavated.

I gave myself over to being in a place with so much life and history, such a strong feeling of people of the past. It was grand to be there, and also a reminder of how short my own time will be, in the great scheme of things.

The city was both a spiritual and a political center – the two concepts were intertwined. In the Totonac language, tajín means thunder, lightning, or hurricane, all of which can occur mightily in the region, between June and October. The god of these forces was called Tajín by the Totonacs.

Scholars generally seem to agree that most of the site was built by the Totonacs, who occupied a large geographical area in this part of Mexico. El Tajín’s epoch of splendor ran from about 800 to 1200 AD and probably involved a population of 25,000 or so, spread over a larger area than the site itself.

El Tajín was abandoned in 1230 AD, for reasons which are unknown — perhaps an attack of the Chichimecas, perhaps something else. El Tajín was not located where it was for reasons of defense – the site is completely open.

By the time of the Spanish conquest, El Tajín was covered by jungle. In 1785, a Spanish engineer named Diego Ruiz was looking for tobacco plantings that the Spanish wanted to control, and he came upon the Pyramid of the Niches. As one of the brochures put it, he became the first European to see El Tajín. I liked that wording better than the more usual Euro-centric phrase, that he “discovered” it.

El Tajín has a number of ball courts, for the ritual game famous for its outcome of human sacrifice. I remember my horror when my family went to Mayan sites in the Yucatan when I was nine. Memories of that repulsion had made me wonder if El Tajín would give me the creeps. Far from it… the sense of civilization that I felt at El Tajín was very strong. Balance was a central concept for them, keeping the world in balance between the opposites of duality that some scholars see as a major part of the Totonac world view.

We wandered around, and found ourselves on a path going uphill through the jungle. Remembering a guidebook’s warning about poisonous snakes in the thicker jungle, we stayed on the trail. Soon we came upon a hand-dug well, with a sign asking people not to dirty it as it was used for drinking. We had reached the far edges of the ruins, and there was a tiny house and cornfield. We wondered about the native peoples of Totonac descent. Did they live here among the ruins of their ancestors for all these centuries?

It was delicious to see so few other tourists around. It seemed that there were fewer than fifty at the whole site while we were there. A rainy Monday in February didn’t pull the numbers that would have been there at other times, but still El Tajín is really off the beaten touristic path. Travel in Mexico in the off season has its benefits. Some friends of ours went to El Tajin at the spring equinox, and they reported that there were thousands of people there for special ceremonies.

Eventually, we wandered back to the museum at the entrance to the grounds. I chatted for a while with a young guard, who was also a student. He was extremely knowledgeable about the history there. I asked a more contemporary question, too: could we camp overnight in the parking lot? He assured me that tourists often did and there was never a problem. All we needed to do was come in around closing time and tell the two night watchmen that we would be there.

We had a pleasant evening in the motorhome, going through the many photos we had taken and reading a book in Spanish that I had bought about El Tajín. The dog food I had purchased came in handy. There were quite a few loose dogs in the parking lot and over by the souvenir stands. One pretty little brown bitch quickly adopted us, chasing off other dogs.

I wanted to feed two other little brown dogs, but even when I put out two and then three separate piles some distance apart, the bitch – whom we dubbed Brownie One – ran growling from pile to pile, managing to keep both other Brownies from getting much. When Kelly stepped out to turn on the hot water heater, the dogs were disappointed that the match he was holding was not something to eat. I briefly wished we could take Brownie One home with us, but I knew our two dogs at home wouldn’t accept her easily. That night, she slept under the RV, and the other Brownies – were they her grown pups? – slept nearby. When a truck came through the parking lot in the wee hours, all three dogs vigorously protected us with their barking. Travel in Mexico involves seeing such dogs everywhere, and I greatly enjoyed getting to know these zestful dogs.

I wondered if we would have interesting dreams so near the ruins, but neither of us remembered any. Early in the morning, we saw people leaving the ruins to go to work and school, adding to the sense of the continuity of life. As soon as the site was officially open, Kelly took off for several hours with his video camera. I enjoyed a little more dog time and then roamed the site for a while myself.

Back at the entrance area, I had a question for a young man at the front desk with whom I had spoken the day before. There was another man with him, also in the white shirt and beige slacks that signaled they were employees of the site, which is run cooperatively by state of Veracruz and the National Institute of Anthropology and History.

I had noticed the enthusiasm of everyone working there, not typical stolid museum guard personalities at all. “Everyone who works here seems so interested in the site,” I began. “Are you archaeologists?” I thought they might be graduate students.

No, said the older man, they weren’t archaeologists. The younger one explained that they were Totonacs themselves. They spoke Totonac in their homes, from childhood. These great ruins were the creations of their ancestors. He said a couple of other things that I couldn’t quite understand… I was getting better at following spoken Spanish, and they were speaking more clearly than most, probably from their exposure to other foreigners. But still I rarely understood 100% of a conversation.

We left El Tajín with a feeling of immense satisfaction, a sense of having been greatly enriched. It would turn out to be one of the high points of our entire Mexican trip.