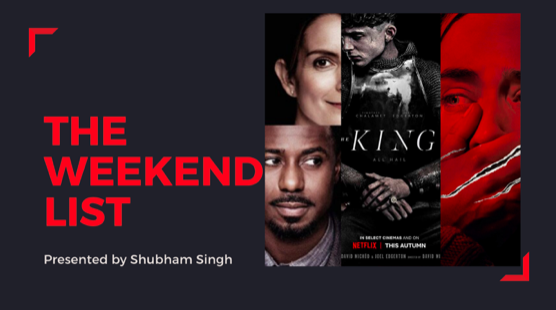 Welcome to the Mid-November weekend!

In case you are confused about what to ‘stream and chill’, snuggled in the comfort of your bed, we’re here to the rescue. These are the 5 strongly recommended shows/films from various streaming platforms that you should devour asap.

This John Krasinski’s horror thriller starring will leave you shocked with its craft. I bet you haven’t something like this before. Film revolves around a family struggling in a post apocalyptic world to survive around blood thirsty creatures who are noise sensitive. I suggest you use headphones to experience the adrenaline pumping background score, and the silence.

Well no one can deny the fact that Timothee Chalamet is the next big thing and in his latest Netflix movie he proves his mettle. The King, a period drama, tells the story of Young Henry V being throned as the King of England and the bloodshed that went into and after this. The battle scene in the final act is phenomenal and gives you one hell of an experience.

Modern Love is an anthology series starring Anne Hathaway, Dev Patel, Andrew Scott and lots and lots of other beautiful faces. But what it makes it even more beautiful is the subtlety with which the six love stories are told. The episodes are just 30 minutes long and deal with some real contemporary issues that stays with you for long.

As you read this, the third season of one of the most praised shows, The Crown, finds it way on Netflix. Based on the life of Queen Elizabeth and her political highs and lows, this show is a visual treat. The screenplay is fast paced and keeps you really engrossed.

I want you to watch it without reading anything about it. Easily one of the finest things to come out of Netflix. Based on real incidents, this series will definitely test your conscience as a human. A goddamn revolution in its own. Highly recommended!