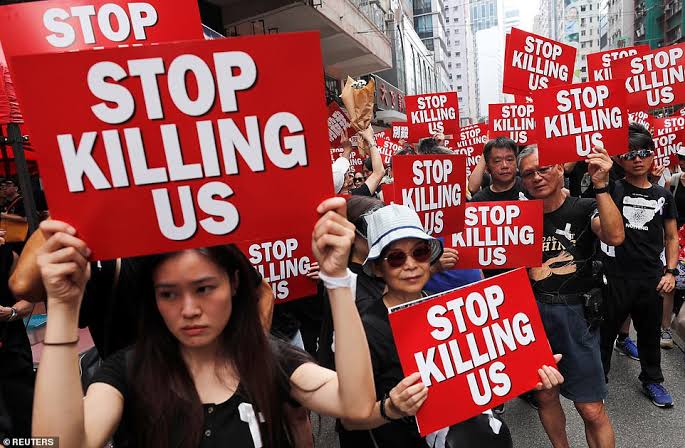 HONG KONG (Reuters) – Hong Kong protesters held a vigil for “martyrs” on Saturday and many demanded “revenge” after a student died in hospital this week following a high fall, fuelling anger among pro-democracy demonstrators who first took to the streets in June.

Thousands of people peacefully gathered in Tamar Park next to central government offices in the former British colony that returned to Chinese rule in 1997, after they had secured rare permission from the police to hold the evening rally.

The protesters sang hymns and carried flowers, while many shouted “revenge,” a call heard increasingly often at rallies and given added impetus since a student died on Friday after falling from a multi-storey car park during a protest.

“Tonight we are not only here to mourn for him but to show the government, the Chinese Communist Party and the world that the things that have happened in the last six months have not been forgotten,” said Tom, 26, a government worker who asked that only his first name be used.

Chow Tsz-lok, 22, a student at Hong Kong’s University of Science and Technology (UST), fell on Monday as protesters were being dispersed by police. Attendees hang a banner at a gathering, paying tribute to Chow Tsz-lok, 22, a university student who died after he fell during a protest in Hong Kong, China, November 8, 2019.

Rallies have often erupted into clashes between police and protesters, creating the worst political crisis in the territory for decades, although Saturday’s vigil that drew students, older people and a few children was quiet in the early evening.

Police said they had fired one round of live ammunition on Friday as a warning to what they described as “a large group of rioters armed with offensive weapons” who threw bricks at officers trying to clear street barricades in the Kowloon area.

“The lives of the officers were under serious threat,” police said in the statement, released on Saturday.

Students and young people have been at the forefront of the hundreds of thousands who have taken to the streets to seek greater democracy, among other demands, and rally against perceived Chinese meddling in the Asian financial hub.

China denies interfering in Hong Kong and has blamed Western countries for stirring up trouble.

Under China’s “one country, two systems” formula, Hong Kong has retained freedoms from the colonial era not enjoyed on the mainland, including an independent judiciary and the right to protest.

Seven Hong Kong pro-democracy lawmakers had been detained or faced arrest as of Saturday and are due to appear in court on Monday on charges of obstructing a May meeting of the local assembly, according to police and several of the lawmakers.

“We believe that the government together with the police, as well as the pro-establishment camp, they are trying to escalate the anger of Hong Kong people in order to cancel or even to postpone the upcoming district council election,” Tanya Chan, a pro-democracy lawmaker, said at a press briefing, referring to upcoming elections on November 24.

One of the arrested lawmakers, Gary Fan, said the detentions were the result of “political prosecutions and judicial crackdowns” by Hong Kong chief executive Carrie Lam.

Protesters have called for a general strike on Monday and for people to block public transport, although when such calls have been made in the past they have come to nothing.

The death of the student is likely to fuel anger against the police, who protesters accuse of using excessive force.

Last weekend, anti-government protesters crowded a shopping mall in running clashes with police that saw a man slash people with a knife and bite off part of the ear of a politician.