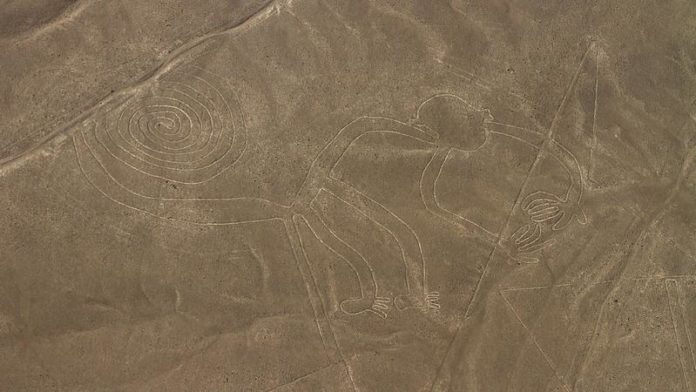 If you were to tromp across the Nasca Desert of southern Peru, you’d likely walk across enormous designs in the ground — we’re talking as long as the Empire State Building is tall, minus the spire. You probably wouldn’t know it from where you were standing, but during the daytime, the designs become abundantly vivid from the perspective of a plane or a helicopter. These are known as the Nasca Lines: designs depicting monkeys, flowers, and other flora and fauna that were made by a man nearly 2,000 years ago. How and why did people centuries ago create designs that can only be viewed by modern aircraft?

According to National Geographic, “In total, there are over 800 straight lines, 300 geometric figures and 70 animal and plant designs, also called biomorphs. Some of the straight lines run up to 30 miles, while the biomorphs range from 50 to 1,200 feet in length.” It’s hard to say which is more impressive: the symbol of a jaguar god hundreds of feet long, or a single line that’s 30 miles long. However, they were all created in the same impressive way.

Drawings in the ground like these are known as geoglyphs, and they come in “positive” and “negative” versions. A positive geoglyph is formed with a material that sits on top of the ground, as with the Effigy Mounds National Monument . Negative geoglyphs are created via digging into the ground, as is the case with the Nasca Lines. To create the lines, the Nasca people would dig out the first foot or so of rust-colored rock and dirt. The earth underneath was a lighter shade, making the lines distinctly visible from the air and appear as long, mysterious trenches from the ground. Given the fact that the Nasca Desert is one of the driest places on Earth — it gets about 4mm of rain a year on average — the lines have stayed pretty much the same since they were first created.

Theories as to why the lines exist abound. Early guesses were that they corresponded with the stars, others suspect ancient hot-air balloons were at play, and of course, no massive and ancient formation would be complete without a theory from the History show Ancient Aliens. But as research has progressed, all signs point to water.

Some researchers think the lines most likely led to areas of ritual where the Nasca people prayed for rain. The animal symbols are an important clue. “Animal symbolism is common throughout the Andes and are found in the biomorphs drawn upon the Nasca plain: spiders are believed to be a sign of rain, hummingbirds are associated with fertility, and monkeys are found in the Amazon — an area with an abundance of water,” according to National Geographic. Indeed, a 2016 satellite study suggested that the spiral holes known as puquios that the lines led to were actually used to bring water up from underground. Perhaps they didn’t lead to places to pray for water but instead places to actually retrieve it.