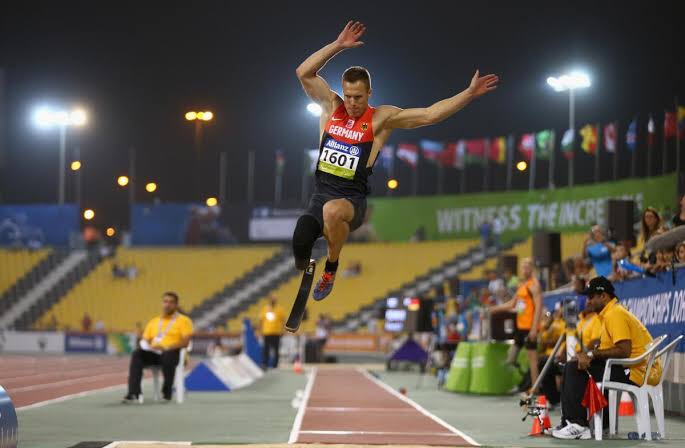 Long jump history arches back thousands of years to the ancient Olympic Games in Greece. In those days it was a part of the pentathlon event, and this makes it one of the oldest track and field events and the oldest jumping event in athletics.

The original Olympics were a competition and training ground for warriors. The event was created and included in the Olympics because it was deemed important for warriors to be agile and able to avoid obstacles such as leaping across ditches or streams.

At first, the athletes were required to carry a weight in each hand that was between 1 and 4.5 kilos while running. These were called halteres and they were used to gain momentum with when you were at the point of making the leap. The pit that was originally used was not filled with sand as it is today, but was merely a pit of tilled earth.

It is thought due to witness reports of the Olympics in Greece that the longjump was accompanied by music, which was used to give the athlete some rhythm into the jump while running with their weights. It was thought that the representations of long jump at Ancient Greece were in fact a triple jump, but it has been shown that the event was what we know as long jump.

When the modern Olympics were started in 1896, the winner of the first long jump gold medal was Ellery Clark who jumped 6.35 meters. Another milestone in the history of the event was the world record set in 1935 by Jesse Owens who jumped 8.13 meters. This record would stay in place for 25 years until it was broken in 1960. The current longjump world record is 8.95 meters in the men’s event and 7.52 meters in the women’s. The women’s record has been in place for more than 20 years.

Long jump history goes back thousands of years and today it is still a popular track and field event, which is popular for athletes of all ages.