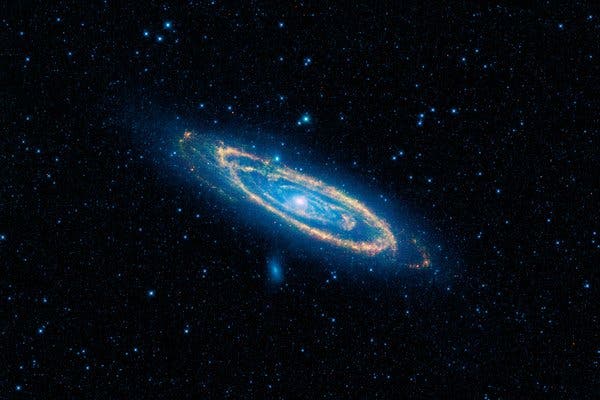 Our Milky Way’s closest large galactic neighbor, the spiral Andromeda galaxy, has a strange, and very well-kept secret that it has long successfully hidden from the prying eyes of curious astronomers. Andromeda features a powerful source of high-energy X-ray emission, but its identity has remained an intriguing mystery–until now. In March 2017, a team of astronomers reported in a new study that NASA’s Nuclear Spectroscopic Telescope Array (NuSTAR) mission has managed to detect the elusive object that is the culprit behind this high-energy radiation. The object, called Swift J0042.5+4112 is a possible pulsar–a newborn neutron star that is the extremely dense, city-sized corpse of a doomed massive star that has perished in a fiery, brilliant, and beautiful supernova blast. Born spinning wildly, as they emerge–much like the Phoenix Bird of Greek mythology–from the raging funeral pyre of their massive progenitor stars, pulsars are highly magnetized objects, and Swift J0042.6+4112 shows a spectrum that is very similar to known pulsars inhabiting our own Milky Way Galaxy.

This new interpretation of the identity of the mysterious object, haunting Andromeda, is based on its emission in high-energy X-rays, which NuSTAR is uniquely capable of measuring. Furthermore, Swift J0042.6+4112 is likely a binary system, in which material from a companion star gets sipped up by the vampire-like pulsar–which spews out high-energy radiation as the stolen material grows hotter, and hotter, and hotter.

“We didn’t know what it was until we looked at it with NuSTAR,” commented Dr. Mihoko Yukita in a March 23, 2017 NASA Jet Propulsion Laboratory (JPL) Press Release. Dr. Yukita, who is of Johns Hopkins University in Baltimore, Maryland, is lead author of a research paper, describing the mysterious object, that is published in the March 15, 2017 issue of The Astrophysical Journal. The JPL is in Pasadena, California.

This newly discovered possible pulsar reveals its presence as a blue dot in a NuSTAR image of the Andromeda Galaxy (M31). The color blue was chosen to represent the highest-energy X-rays. The pulsar candidate shows itself to be brighter than anything else in its host galaxy.

Neutron stars are Tokyo-sized stellar ghosts, and pulsars are rapidly and regularly whirling newborn neutron stars. Stars, like people, do not live forever. When a massive star, that is still on the hydrogen-burning main-sequence of the Hertzsprung-Russell Diagram of Stellar Evolution, grows old, and has finally depleted its necessary supply of thermonuclear fuel, it reaches the inevitable end of the stellar road. The imploded mess, composed of what is left of the erstwhile hydrogen-burning massive star, creates from this wreckage a very dense core–which will become the lingering neutron star. During the explosive event, the progenitor star’s outer gaseous layers collapse toward the core–the neutron star–then violently rebound outward in the terrible, fierce fireworks of a supernova tantrum. The rapidly twirling baby neutron star–the pulsar–shoots out a brilliant beam of radiation into space. This beam is frequently likened to the brilliant, sweeping beacon of a lighthouse on Earth, and it can be observed by astronomers as pulses of radio waves and other forms of radiation.

Neutron stars can travel throughout our Universe as isolated bodies, or as members of a binary system in close contact with another still-“living” main-sequence star–or even with another stellar ghost, similar to itself. Neutron stars have also been observed embedded within bright and beautifully glowing supernova remnants. Some neutron stars even serve as the stellar parents of very unfortunate planets. Pulsar planets are hostile worlds that are mercilessly showered by a constant rain of radiation flowing out from the young (and deadly) neutron star. Indeed, the first batch of exoplanets, discovered back in 1992, orbit a pulsar. Pulsars famously flicker brilliantly off and on with remarkable regularity The pulsations of these spinning objects occur because of their extremely rapid and regular rotation. Dr. Jocelyn Bell Burnell discovered the first pulsar in 1967, when she was still a graduate student at the University of Cambridge in the UK.

Stars are immense spheres of searing-hot, roiling, glaring gas. These brilliant balls of fire are pulled together very tightly by the relentless tug of their own powerful gravity. This is why the cores of stars are both extremely dense as well as extremely bright. In fact, stars are so hot that they can engage in the process of nuclear fusion–and it is this very process that lights their fires. Nuclear fusion causes the atoms of lighter elements–such as hydrogen and helium–to fuse together to form increasingly heavier and heavier atomic elements. The production of heavier atomic elements, within the cores of stars, is called stellar nucleosynthesis. Stellar nucleosynthesis starts with the fusion of hydrogen atoms. Hydrogen is both the most abundant and lightest atomic element in the Universe. The extremely hot cores of stars fuse hydrogen atoms into the second-lightest atomic element in the Universe–which is helium. Atomic elements heavier than helium are termed metals by astronomers. All of the metals were formed in the cores of seething hot stars–or, alternatively, in the supernova explosion that ends the life of a massive star. The heaviest atomic elements of all–such as gold and uranium–are fused in the supernova explosion (supernova nucleosynthesis).

Nuclear fusion churns out a large amount of energy, which is why stars are both hot and bright. This energy production results in radiation pressure that pushes everything out and away from the star. This pressure is powerful enough to maintain a very necessary balance, because the relentless pull of gravity squeezes everything in. Radiation pressure and gravity are in a constant tug-of-war within the star. The battle continues until the star finally has managed to burn its necessary supply of nuclear fuel. At this very critical stage, gravity goes on to win the war. As a result of gravity’s victory, the star’s core implodes–and it goes supernova. This very delicate balance between gravity and radiation pressure is dependent on the mass of the star, with the most massive stars being squeezed much more tightly than their less massive kin. Because, in massive stars, the squeeze of their own gravity is so intense, their nuclear fusion reactions proceed much more quickly than in smaller stars. Massive stars live fast and die young. Less massive stars can live quietly and peacefully, for a very long time, before they finally perish.

The weird stellar corpses that are neutron stars are commonly only about 20 kilometers in diameter. However, they weigh-in at about 1.4 times that of our Sun. Indeed, one teaspoon full of neutron star material can weigh as much as a herd of buffalo. These hot, dense, and relatively small spheres have magnetic fields that are about 1,000,000 times more intense than the most powerful magnetic fields on Earth.

The collapsing iron core belonging to a doomed massive star–that is just about ready to go supernova–triggers a chaotic, violent, brilliant event. An iron core marks a massive star’s grand finale in the universal drama. This is because iron cannot serve as fuel in the process of nuclear fusion–and nuclear fusion is what has kept the erstwhile main-sequence star fluffy against the terrible squeeze of its own gravity.

Spiral galaxies like our large Milky Way, and the nearby Andromeda, are majestic, starlit pinwheels twirling elegantly in Space. Both our Milky Way and Andromeda are the two largest inhabitants of the Local Group of galaxies, which also hosts about 40 smaller galactic constituents. The Local Group is a few million light-years across. However, this is actually a small region when compared to immense galaxy clusters. Enormous galactic clusters can host literally hundreds of resident galaxies. Our own Local Group is situated near the outer limits of the Virgo Galaxy Clusterwhose core is about 50 million light-years from us. The numerous groups of galaxies and galaxy clusters are themselves smaller denizens of the unimaginably immense web-like, heavy filaments, and slender broad expanses, that compose the Cosmic Web. For example, the so-called Great Wall is a sheet-like collection of galaxies situated approximately 200 million light-years away from us, and a similar enormous structure is named the Great Attractor.The Great Attractor is exerting a powerful gravitational pull on the entire Virgo Cluster of galaxies. We are, of course, carried away with the rest of the galactic inhabitants of the Local Group at the breathtaking speed of several hundred kilometers per second.

Right now, Andromeda is a safe 2 million light-years away from our Galaxy–but this will change. Unfortunately, gravity’s powerful grip is pulling Andromeda towards our Milky Way at about 100 kilometers per second–and the two large spirals are headed for a violent smash-up. The good news is that this fatal collision will not happen for about 4 billion years–but when it does, both our Milky Way and Andromeda will experience a sea-change, merging together to create an elliptical (football-shaped) single galaxy–replacing the duo of former elegant and lovely spirals. The new elliptical galaxy will be twice the size of the two spirals that went into its construction. The new galaxy, that will form from the wreckage, has been given the playful name of the Milkomeda Galaxy by astronomers–in honor of the duo of former spirals that will merge together to create it.