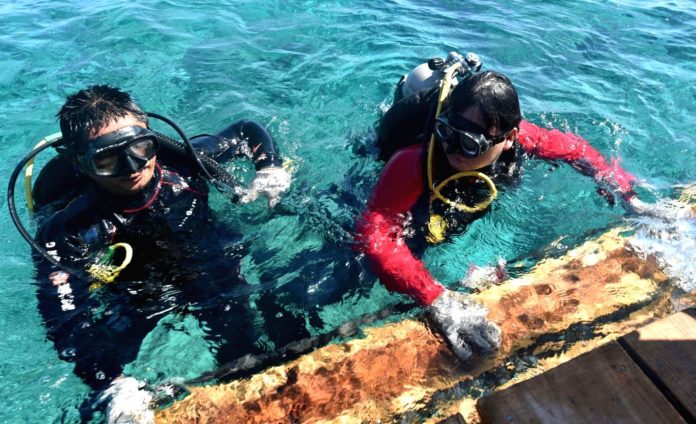 (IANS) An official with the Department of Antiquities confirmed on Saturday the discovery of an ancient shipwreck laden with a cargo of ceramic pots off the south shores of Cyprus.

Ceramics expert at the University of Cyprus, Stella Demesticha, explained in an interview with state radio that an abundance of underwater findings were ceramic pots dating back to the end of the sixth or the seventh century AD, the Xinhua news agency reported.

Extensive remains of broken amphorae were found scattered over an area of approximately 1,30,000 square meters on a rocky outcrop close to a partially submerged breakwater, which seemed to be part of an ancient commercial port at an area known as Dreamer’s Bay of the Akrotiri Peninsula.

Access to the area is restricted as it is part of the British Akrotiri Air Base and is close to military installations.

The confirmation of the discovery of the shipwreck came as part of research in the context of the Ancient Akrotiri Project, an ongoing collaborative research project on the peninsula conducted since 2015 and led by the University of Leicester, with the participation of the Universities of Cyprus and Athens.

Marine archeologists also found an Aswan granite column in the middle of the wreck which is believed to belong to the sunken vessel.

An extensive survey of the area revealed almost 800 shoulders and rims of amphorae, denoting that the vessel was a rather big one.

“The findings were made possible by a highly coordinated effort between various experts, government departments and universities as well as the British Bases,” said a Department of Antiquities report on the research.

A team of professional diving maritime archaeologists, divers, surveyors, photographers, and terrestrial archaeologists predominantly from Cyprus and Britain investigated the ancient breakwater and the surrounding seafloor in Dreamer’s Bay.

Findings on land and underwater revealed that the area was a busy port where vessels made landfall when approaching Cyprus from the south or sailing to the east or west.