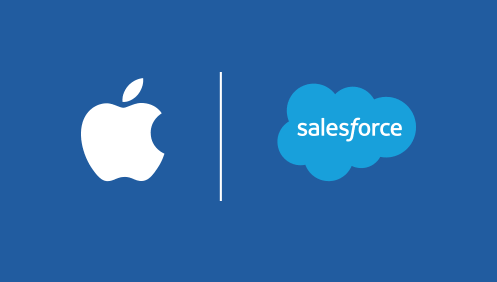 Last year at Dreamforce, Salesforce’s enormous annual customer conference, Apple and Salesforce announced the beginnings of a partnership where the two organizations would work together to enhance Salesforce products running on Apple devices. Today, as this year’s Dreamforce conference begins, the companies announced the fruits of that labor with general availability of two new tools that were first announced at last year’s event.

For starters, Apple has been working with Salesforce to redesign the Salesforce Mobile app to build in Apple iOS features into the app like being able to use Siri shortcuts to get work done faster, using your voice instead of typing, something that’s sometimes awkward to do on a mobile device.

For instance, you could say, “Hey Siri, next sales meeting,” and Siri can interact with Salesforce CRM to tell you who your meeting is with, the name of his or her company, when you last met and what the Einstein opportunity score is to help you predict how likely it is that you could make a sale today (or eventually).

In addition, the Mobile App takes advantage of Apple’s Handoff feature to reflect changes across devices immediately, and Apple’s Face ID for easy log on to the app.

The company reports that over 1000 companies participated in piloting the updated app, which constitutes the largest pilot in the history of the organization.

Salesforce also announced its new mobile development platform SDK, built specifically for iOS and iPadOS using the Swift language. The idea is to provide a tool to give Salesforce developers with the ability to build apps for iPad and iPhone, then package them up with a new tool called Swift UI and Package Manager.

Trailhead Go is the mobile version of the company’s online learning platform designed specifically for iPad and iPhone. It was built using the new Mobile SDK, and allows users to access the same courses they can on the web in a mobile context. The new mobile tool includes the ability to Handoff between devices along with support for picture-in-picture and split view for multi-tasking when it makes sense.

As this partnership continues to develop, both companies should benefit. Salesforce gets direct access to Apple features, and can work with Apple to implement them in an optimized way. Apple gets deeper access to the enterprise with help from Salesforce, one of the biggest enterprise software vendors around.