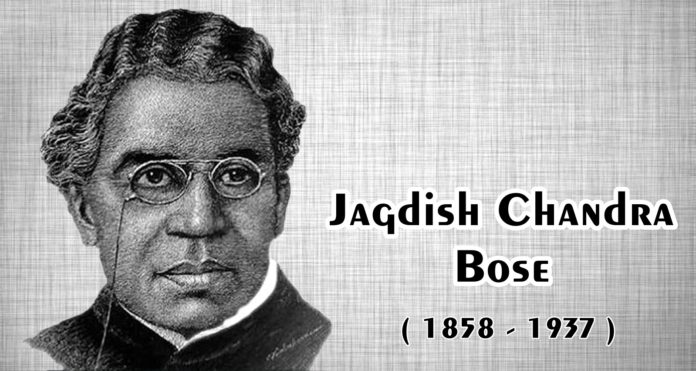 Sir Jagadish Chandra Bose was an Indian polymath, physicist, biologist, biophysicist, botanist and archaeologist, and an early writer of science fiction. He pioneered the investigation of radio and microwave optics, made significant contributions to plant science, and laid the foundations of experimental science in the Indian subcontinent. IEEE named him one of the fathers of radio science. Bose is considered the father of Bengali science fiction, and also invented the crescograph, a device for measuring the growth of plants. A crater on the moon has been named in his honour.

Jagadish Chandra Bose was born on 30 November, 1858 at Mymensingh, now in Bangladesh. He was raised in a home committed to pure Indian traditions and culture. He received his elementary education from a vernacular school, because his father believed that Bose should learn his own mother tongue, Bengali, before studying a foreign language like English.

Later he attended St. Xavier’s School at Kolkata and passed the Entrance Examination for Calcutta University.

Bose attended the University of Cambridge studying natural sciences after graduating with a physics degree from Calcutta University. He returned to India in 1884 after completing his B.Sc. degree from Cambridge University and was appointed professor of physical science at Presidency College, Calcutta (now Kolkata).

In 1917 Bose left his professorship and established the Bose Institute at Calcutta which was initially devoted principally to the study of plants. He was its director for twenty years until his death.

The central hall of the Royal Society in London was jam-packed with famous scientists on May 10, 1901. Everyone seemed to be curious to know how Bose’s experiment will demonstrate that plants have feelings like other living beings and humans. Bose chose a plant whose roots were cautiously dipped up to its stem in a vessel holding the bromide solution, which is considered a poison. He plugged in the instrument with the plant and viewed the lighted spot on a screen showing the movements of the plant, as its pulse beat, and the spot began to and fro movement similar to a pendulum. Within minutes, the spot vibrated in a violent manner and finally came to an abrupt stop. The whole thing was almost like a poisoned rat fighting against death. The plant had died due to the exposure to the poisonous bromide solution.

The event was greeted with much appreciation and applause; however some physiologists were not content, and considered Bose as an intruder. They harshly knocked the experiment but Bose did not give up and was confident about his findings.

Using the crescograph, he further researched the response of the plants to fertilizers, light rays and wireless waves. The instrument received widespread acclaim, particularly from the Path Congress of Science in 1900. Many physiologists also supported his findings later on, using more advanced instruments.

Bose authored two illustrious books; ‘Response in the Living and Non-living’ (1902) and ‘The Nervous Mechanism of Plants’ (1926). He also extensively researched the behavior of radio waves. Mostly known as a plant physiologist, he was actually a physicist. Bose made improvements on another instrument called ‘the coherer’, for detecting the radio waves.

He was knighted in 1917 and elected the Fellow of the Royal Society in 1920 for his amazing contributions and achievements. He died aged 78, on 23 November in 1937, in Giridih, India.