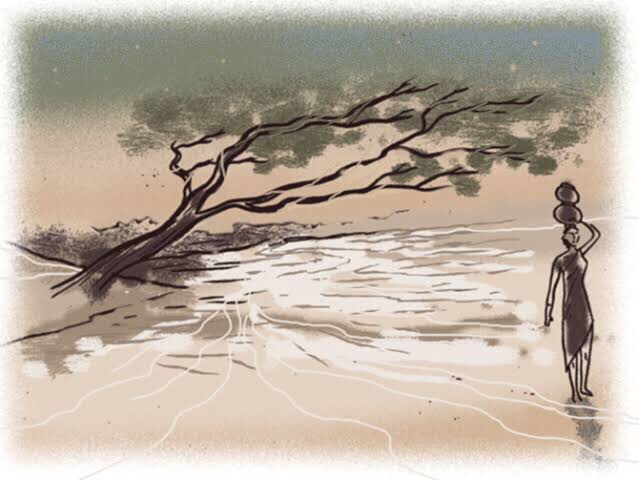 The goddess Sarasvati was originally a personification of this river, but later developed an independent identity. The Sarasvati is also considered by Hindus to exist in a metaphysical form, in which it formed a confluence with the sacred rivers Ganges and Yamuna, at the Triveni Sangam. “Superimposed on the Vedic Sarasvati river is the heavenly river Milky Way, which is seen as “a road to immortality and heavenly after-life.”

Rigvedic and later Vedic texts have been used to propose identification with present-day rivers, or ancient riverbeds. The Nadistuti hymn in the Rigveda (10.75) mentions the Sarasvati between the Yamuna in the east and the Sutlej in the west. Later Vedic texts like the Tandya and Jaiminiya Brahmanas, as well as the Mahabharata, mention that the Sarasvati dried up in a desert.

Since the late 19th-century, scholars have identified the Vedic Saraswati river as the Ghaggar-Hakra River system, which flows through northwestern India and eastern Pakistan, between the Yamuna and the Sutlej. Satellite images have pointed to the more significant river once following the course of the present day Ghaggar River. Scholars have observed that major Indus Valley Civilization sites at Kalibangan (Rajasthan), Banawali and Rakhigarhi (Haryana), Dholavira and Lothal (Gujarat) also lay along this course.

However, identification of the Vedic Sarasvati with the Ghaggar-Hakra system is problematic, since the Ghaggar-Hakra is not only mentioned separately in the Rig Veda river, but is described as having dried up by the time of the composition of the Vedas and Hindu epics. Recent geophysical research suggests that the Ghaggar-Hakra system was a system of monsoon-fed rivers and that the Indus Valley Civilisation may have declined as a result of climate change. That is, the monsoons that fed the rivers diminished at around the time civilisation diminished some 4,000 years ago.

“Sarasvati” may also be identified with the Helmand or Haraxvati river in southern Afghanistan, the name of which may have been reused in its Sanskrit form as the name of the Ghaggar-Hakra river, after the Vedic tribes moved to the Punjab. Sarasvati of the Rig Veda may also refer to two distinct rivers, with the family books referring to the Helmand River, and the more recent 10th mandala referring to the Ghaggar-Hakra.

Sarasvatī is the feminine nominative singular form of the adjective sarasvat (which occurs in the Rigveda as the name of the keeper of the celestial waters), derived from ‘sarasa’ + ‘vat’, meaning ‘having’. Saras appears, in turn, to be the compound of ‘sa’, a prefix meaning ‘with’, plus ‘rasa’, sap or juice, or water, and is defined in the first instance as ‘anything flowing or fluid’ according to Monier-Williams dictionary. Mayrhofer considers unlikely a connection with the root *sar- ‘run, flow’.

Importance of Sarasvati River in Hinduism

The Saraswati river was revered and considered important for Hindus because it is said that it was on this river’s banks, along with its tributary Drishadwati, in the Vedic state of Brahmavarta, that Vedic Sanskrit had its genesis, and important Vedic scriptures like initial part of Rigveda and several Upanishads were supposed to have been composed by Vedic seers. In the Manusmriti, Brahmavarta is portrayed as the “pure” centre of Vedic culture.

The Sarasvati River is mentioned in all but the fourth book of the Rigveda. The most important hymns related to Sarasvati are RV 6.61, RV 7.95 and RV 7.96. Macdonell and Keith provided a comprehensive survey of Vedic references to the Sarasvati River in their Vedic Index.

“Like two bright mother cows who lick their youngling,Vipas and Sutudri speed down their waters.”

“May purifying Sarasvati with all the plenitude of her forms of plenty, rich in substance by the thought, desire our sacrifice.””She, the impeller to happy truths, the awakener in consciousness to right mentalisings, Sarasvati, upholds the sacrifice.””Sarasvati by the perception awakens in consciousness the great flood (the vast movement of the ritam) and illumines entirely all the thoughts”

The Sarasvati is mentioned some fifty times in the hymns of the Rig Veda. It is mentioned in thirteen hymns of the late books (1 and 10) of the Rigveda. Only two of these references are unambiguously to the river: 10.64.9, calling for the aid of three “great rivers”, Sindhu, Sarasvati and Sarayu; and 10.75.5, the geographical list of the Nadistuti sukta. The others invoke Sarasvati as a goddess without direct connection to a specific river.

In 10.30.12, her origin as a river goddess may explain her invocation as a protective deity in a hymn to the celestial waters. In 10.135.5, as Indra drinks Soma he is described as refreshed by Sarasvati. The invocations in 10.17 address Sarasvati as a goddess of the forefathers as well as of the present generation. In 1.13, 1.89, 10.85, 10.66 and 10.141, she is listed with other gods and goddesses, not with rivers. In 10.65, she is invoked together with “holy thoughts” (dhī) and munificence (puraṃdhi), consistent with her role as a goddess of both knowledge and fertility.

Though Sarasvati initially emerged as a river goddess in the Vedic scriptures, in later Hinduism of the Puranas, she was rarely associated with the river. Instead she emerged as an independent goddess of knowledge, learning, wisdom, music and the arts. The evolution of the river goddess into the goddess of knowledge started with later Brahmanas, which identified her as Vāgdevī, the goddess of speech, perhaps due to the centrality of speech in the Vedic cult and the development of the cult on the banks of the river. It is also possible to postulate two originally independent goddesses that were fused into one in later Vedic times.

In a supplementary chapter of the Vajasaneyi-Samhita of the Yajurveda (34.11), Sarasvati is mentioned in a context apparently meaning the Sindhu: “Five rivers flowing on their way speed onward to Sarasvati, but then become Sarasvati a fivefold river in the land.”

The five tributaries of the Sarasvati were the Punjab rivers Drishadvati, Satudri (Sutlej), Chandrabhaga (Chenab), Vipasa (Beas) and the Iravati (Ravi).

The first reference to the disappearance of the lower course of the Sarasvati is from the Brahmanas, texts that are composed in Vedic Sanskrit, but dating to a later date than the Veda Samhitas. The Jaiminiya Brahmana (2.297) speaks of the ‘diving under (upamajjana) of the Sarasvati’, and the Tandya Brahmana (or Pancavimsa Br.) calls this the ‘disappearance’ (vinasana). The same text (25.10.11-16) records that the Sarasvati is so to say meandering (kubjimati) as it could not sustain heaven which it had propped up.

According to the Mahabharata, the Sarasvati dried up to a desert (at a place named Vinasana or Adarsana)[36][37] and joins the sea “impetuously”. The desert made when Saraswati dried up was the Thar desert. MB.3.81.115 locates the state of Kurupradesh or Kuru Kingdom to the south of the Sarasvati and north of the Drishadvati. The dried-up, seasonal Ghaggar River in Rajasthan and Haryana reflects the same geographical view described in the Mahabharata.

According to Hindu scriptures, a journey was made during the Mahabharata by Balrama along the banks of the Saraswati from Dwarka to Mathura. There were ancient kingdoms too (the era of the Mahajanapads) that lay in parts of north Rajasthan and that were named on the Saraswati River.

Several Puranas describe the Sarasvati River, and also record that the river separated into a number of lakes (saras).

In the Skanda Purana, the Sarasvati originates from the water pot of Brahma and flows from Plaksa on the Himalayas. It then turns west at Kedara and also flows underground. Five distributaries of the Sarasvati are mentioned. The text regards Sarasvati as a form of Brahma’s consort Brahmi. According to the Vamana Purana 32.1-4, the Sarasvati rose from the Plaksa tree (Pipal tree).

“One who bathes and drinks there where the Gangā, Yamunā and Sarasvati join enjoys liberation. Of this there is no doubt.”

Already since the 19th century, attempts have been made to identify the beautiful Sarasvati of the Vedas with physical rivers. Many think that the Vedic Sarasvati river once flowed east of the Indus (Sindhu) river. Scientists, geologists as well as scholars have identified the Sarasvati with many present-day or now defunct rivers.

Two theories are popular in the attempts to identify the Sarasvati. Several scholars have identified the river with the present-day Ghaggar-Hakra River or dried up part of it, which is located in Northwestern India and Pakistan. A second popular theory associates the river with the Helmand river or an ancient river in the present Helmand Valley in Afghanistan.