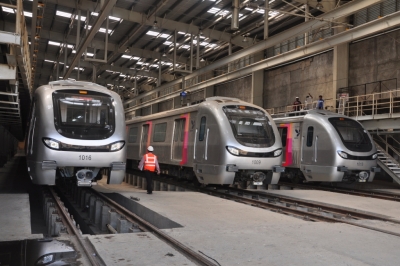 The live-fire drill was conducted between 9:31-9:54 p.m. by various operations teams at Mumbai Metro during operational hours.

In the drill, a blaze was reported at the concourse level.

The Station Controller (SC) checked for the location and directed commuters from both the platforms to be evacuated to the concourse and then to the road level under the guidance of staff.

The staff told commuters not to panic and at the same time adhere to their instructions. Similarly, the commuters on the concourse level were evacuated to the road level.

Once the situation was in complete control, trains were permitted to run in both directions. Then, commuters were guided back to the platform to board the next train.

It was an integrated fire drill involving fire brigade, police and ambulance.

“Our endeavor is to keep security and safety as the topmost priority. Hence, since the inception of the project, we have taken care of minute details and the drill was pulled off by seamless coordination among all the departments and agencies causing minimal inconvenience to the commuters. Our disaster management protocols are not only practical but also a judicious amalgamation of best manpower and latest technology,” said a spokesperson.

He said a live-fire drill is a safety exercise in which a realistic scenario is created and building/premises are evacuated in the event of a fire.

This is demonstrated with the use of safety protocols, trained staff, and necessary equipment.

These mock drills are in association with the Force One Commandos, QRT (Quick Response Teams) and NSG (National Security Guards), besides periodic disaster management exercises, said the spokesperson.

These drills/exercises help the agencies familiarise themselves with the working of Metro systems and to check internal readiness to tackle different situations such as terrorist attacks, evacuation from trains/stations, and fire.