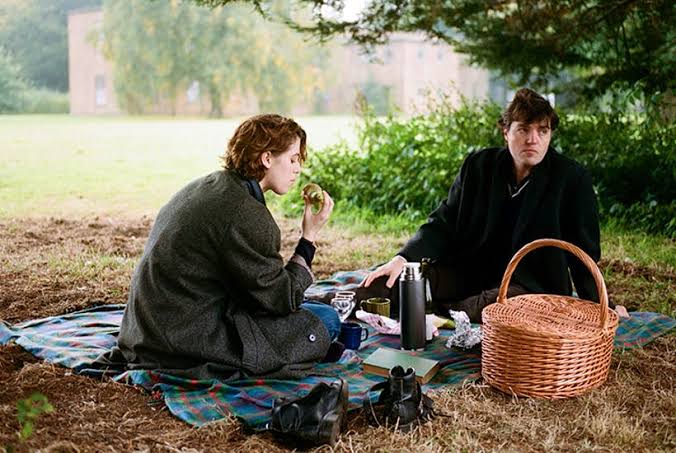 Being a fan of the whole unconditional love story kind of plot, I was automatically drawn to this film. Having watched the trailer and understood a little about the plot, The Souvenir was one of the top films on my watch list.

The film follows a young ambitious, well to do woman named Julie who lives in a nice house with a friend and his girlfriend.While attending Film school, she went on to visit Sunderland and wants to film a sad little story she got inspired to tell from her visit there.

Enter Tom Burke, the charming but secretive man who works for the foreign office and seems to be pretty loaded from the made-to-measure suits he sports throughout the film. They meet, they chat, he gifts her a postcard with the painting ‘The Souvenir’, moves in with her, they fall in love, go vacationing in Venice.

The catch remains, he’s a heroin addict and the woman had no idea. There’s actually a scene wherein she sees needle marks on his arm and doesn’t realise what they are.It’s only later when she goes to visit a couple of his friends where the incredulous Richard Ayoade asks her, “You’re a goody-goody and he’s a heroine addict. Where do the two of you tesselate?”.Strangely enough, that’s the first time she realises that she’s been living with a heroin addict. We see a toxic relationship unfold, wherein the man pretty much sucks everything out of a woman while the woman happily lets him.

Up until here, the film was brilliant for me. I’ve actually seen the most ambitious women falling in the trap of a lying parasite and becoming blind in love. The film was putting a very real thing in perspective for me. Unfortunately, after this point in the film, it goes downhill. Now I’m all for an undying, I’ll-be-with-you -even-at-your-worst story but this story just doesn’t play the concept out well.

Even with strong performances by all the cast members, the story doesn’t feel real after a point. The chemistry between the two, Byrne and Burke, starts with some pseudo heat turning into dry sexual tension (keyword:dry), and then hastily wants to make me notice the ‘tender’ love between them. A weird camaraderie is the most I can label this with, not love for sure. Not at a single point in the film was I convinced that she was so madly in love with the man that she even went to score heroin with him. The film forces me to believe that they’re in love, forces me to be invested in the story, while I border on disinterest after one or two repetitions of the plot, in itself.

Tom Burke, while being a stellar performer, plays a very one-dimensional character. Byrne, I hope gets better parts to play in the future because the woman can act.

Technicality wise, the film tries to keep to the ‘every frame a painting’ concept and almost succeeds too but after a point, the film is so so dragged out that even the beautiful frames seem annoying.

If I might add, there’s a sort of redundancy in the film which didn’t work for me, repetitive shots, repetitive transitions, repetitive expressions. The film was one hour too long for me and could’ve easily been cut short and made a lot more impact.