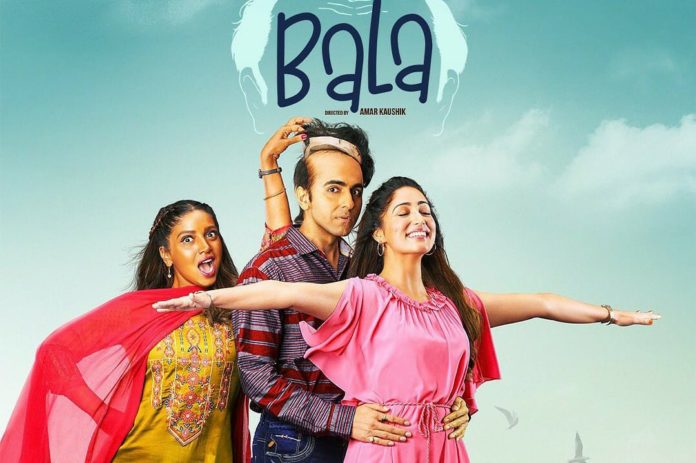 Ayushmann Khurrana and Bhumi Pednekar starrer social mockumentary is a tight slap for millennials obsessed with “Tiktok” and “Instagram Filters”.

Film begins with the voiceover of a hair follicle. It explains how it plays the role of ‘The Taj’ in any homo sapien’s life. Later in the film, a ten-year-old girl gets mocked by his classmate for being dark complexioned. Also, an adult female explains to her husband how in spite of getting just 45% in the exams, lots of boys in her college were mad for her because she looked charming and how the 500 likes that gets on her pictures define her life. She also says, “Aao Honeymoon ki Tiktok banayein (Let us make Tiktok of Honeymoon)”. Now all these scenes are intended  to make the audience laugh but subconsciously the gravity of emotions never disappear and here lies the beauty of Bala.

This is the second film of Amar Kaushik who surprised us last year with Stree which wassuperficially a horror comedy but was actually a commentary on the status of women in our society. Here in Bala too, Kaushik tries to emphasize the obsession of this generation to look picture perfect.

“Hum looks mein compromise nahi karte” (We don’t compromise in looks), says mother of a Lucknow Tiktok star in one of the scenes.

And in this Kaushik’s chariot, Ayushmann Khurrana takes the front seat. Playing a frustrated and confused marketing agent of a beauty brand and suffering from Alopecia, Khurrana is so convincing in his act that it is hard to believe he is the same Ayushmann we know. And in spite of playing the same middle class small town characters (as in Shubh Mangal Saavdhaan, Dream Girl, Dum Laga Ke Haisha, Bareilly Ki Barfi) he somehow manages to bring originality in each one of them. Ayushmann has brought versatility in places having cent percent chance of being repetitive and for an actor(and also for the audience) this is the real victory. In some places where writing falls flat, Ayushmann comes to the rescue and delightfully saves the day.

Yami Gautam and Bhumi Pednekar are aptly cast. Pednekar’s skin tone has been darkened unconvincingly but she perfectly carries the task of being the moral anchor of this film.

In spite of having flaws, I genuinely want people to watch this film. With the advent of internet, technology and social media we have turned so narcissistic and shallow as humans that there is no room to celebrate individuality. Bala, with genuine intentions, stands in front of us holding a mirror.