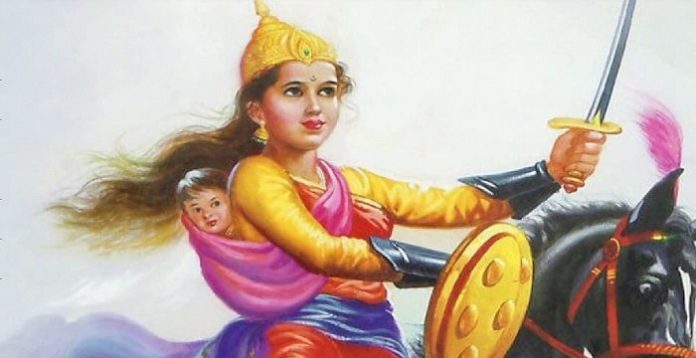 Rani Lakshmibai was born on 19 November 1828 in the town of Varanasi into a Marathi Karhade Brahmin family. She was named Manikarnika Tambe and was nicknamed Manu.  The Peshwa called her “Chhabili”, which means “playful”. She was educated at home, able to read and write, and was more independent in her childhood than others of her age; her studies included shooting, horsemanship, fencing and mallakhamba with her childhood friends Nana Sahib and Tantia Tope. Rani Lakshmibai contrasted many of the patriarchal cultural expectations for women in India’s society at this time.

Rani Lakshmibai was accustomed to riding on horseback accompanied by a small escort between the palace and the temple although sometimes she was carried by palanquin. Her horses included Sarangi, Pavan and Baadal; according to historians she rode Baadal when escaping from the fort in 1858. The Rani Mahal, the palace of Rani Lakshmibai, has now been converted into a museum. It houses a collection of archaeological remains of the period between the 9th and 12th centuries AD.

Manikarnika was married to the Maharaja of Jhansi, Raja Gangadhar Newalkar, in May 1842 and was afterwards called Lakshmibai (or Laxmibai) in honour of the Hindu goddess Lakshmi and according to the traditions. She gave birth to a boy, later named Damodar Rao, in 1851, who died after four months. The Maharaja adopted a child called Anand Rao, the son of Gangadhar Rao’s cousin, who was renamed Damodar Rao, on the day before the Maharaja died. The adoption was in the presence of the British political officer who was given a letter from the Maharaja instructing that the child be treated with respect and that the government of Jhansi should be given to his widow for her lifetime.

After the death of the Maharaja in November 1853, because Damodar Rao (born Anand Rao) was an adopted son, the British East India Company, under Governor-General Lord Dalhousie, applied the Doctrine of Lapse, rejecting Damodar Rao’s claim to the throne and annexing the state to its territories. When she was informed of this she cried out “I shall not surrender my Jhansi” (Main meri Jhansi nahi doongi). In March 1854, Rani Lakshmibai was given an annual pension of Rs. 60,000 and ordered to leave the palace and the fort.

Beginning of the Rebellion

On 10 May 1857 the Indian Rebellion started in Meerut. When news of the fighting reached Jhansi, the Rani asked the British political officer, Captain Alexander Skene, for permission to raise a body of armed men for her own protection; Skene agreed to this. The city was relatively calm in the midst of the regional unrest, but the Rani conducted a Haldi Kumkum ceremony with pomp in front of all the women of Jhansi to provide assurance to her subjects, in the summer of 1857 and to convince them that the British were cowards and not to be afraid of them.

In June 1857, rebels of the 12th Bengal Native Infantry seized the Star Fort of Jhansi containing the treasure and magazine, and after persuading the British to lay down their arms by promising them no harm, broke their word and massacred 40 to 60 European officers of the garrison along with their wives and children. The Rani’s involvement in this massacre is still a subject of debate.

Four days after the massacre the sepoys left Jhansi, having obtained a large sum of money from the Rani, and having threatened to blow up the palace where she lived. Following this, as the only source of authority in the city the Rani felt obliged to assume the administration and wrote to Major Erskine, commissioner of the Saugor division explaining the events which had led her to do so. On 2 July, Erskine wrote in reply, requesting her to “manage the District for the British Government” until the arrival of a British Superintendent. The Rani’s forces defeated an attempt by the mutineers to assert the claim to the throne of a rival prince Sadashiv Rao (nephew of Maharaja Gangadhar Rao) who was captured and imprisoned.

There was then an invasion of Jhansi by the forces of Company allies Orchha and Datia; their intention however was to divide Jhansi between themselves. The Rani appealed to the British for aid but it was now believed by the governor-general that she was responsible for the massacre and no reply was received. She set up a foundry to cast cannon to be used on the walls of the fort and assembled forces including some from former feudatories of Jhansi and elements of the mutineers which were able to defeat the invaders in August 1857. Her intention at this time was still to hold Jhansi on behalf of the British.

From August 1857 to January 1858 Jhansi under the Rani’s rule was at peace. The British had announced that troops would be sent there to maintain control but the fact that none arrived strengthened the position of a party of her advisers who wanted independence from British rule. When the British forces finally arrived in March they found it well-defended and the fort had heavy guns which could fire over the town and nearby countryside. Hugh Rose, commanding the British forces, demanded the surrender of the city; if this was refused it would be destroyed. After due deliberation the Rani issued a proclamation: “We fight for independence. In the words of Lord Krishna, we will if we are victorious, enjoy the fruits of victory, if defeated and killed on the field of battle, we shall surely earn eternal glory and salvation.” She defended Jhansi against British troops when Sir Hugh Rose besieged Jhansi on 23 March 1858.

The bombardment began on 24 March but was met by heavy return fire and the damaged defences were repaired. The defenders sent appeals for help to Tatya Tope; an army of more than 20,000, headed by Tatya Tope, was sent to relieve Jhansi but they failed to do so when they fought the British on 31 March. During the battle with Tatya Tope’s forces part of the British forces continued the siege and by 2 April it was decided to launch an assault by a breach in the walls. Four columns assaulted the defences at different points and those attempting to scale the walls came under heavy fire. Two other columns had already entered the city and were approaching the palace together. Determined resistance was encountered in every street and in every room of the palace. Street fighting continued into the following day and no quarter was given, even to women and children. “No maudlin clemency was to mark the fall of the city” wrote Thomas Lowe. The Rani withdrew from the palace to the fort and after taking counsel decided that since resistance in the city was useless she must leave and join either Tatya Tope or Rao Sahib (Nana Sahib’s nephew).

According to tradition with Damodar Rao on her back she jumped on her horse Badal from the fort; they survived but the horse died. The Rani escaped in the night with her son, surrounded by guards. The escort included the warriors Khuda Bakhsh Basharat Ali (commandant), Gulam Gaus Khan, Dost Khan, Lala Bhau Bakshi, Moti Bai, Sunder-Mundar, Kashi Bai, Deewan Raghunath Singh and Deewan Jawahar Singh. She decamped to Kalpi with a few guards, where she joined additional rebel forces, including Tatya Tope. They occupied the town of Kalpi and prepared to defend it. On 22 May British forces attacked Kalpi; the forces were commanded by the Rani herself and were again defeated.

The leaders (the Rani of Jhansi, Tatya Tope, the Nawab of Banda, and rao Sahib) fled once more. They came to Gwalior and joined the Indian forces who now held the city (Maharaja Scindia having fled to Agra from the battlefield at Morar). They moved on to Gwalior intending to occupy the strategic Gwalior Fort and the rebel forces occupied the city without opposition. The rebels proclaimed Nana Sahib as Peshwa of a revived Maratha dominion with Rao Sahib as his governor (subedar) in Gwalior. The Rani was unsuccessful in trying to persuade the other rebel leaders to prepare to defend Gwalior against a British attack which she expected would come soon. General Rose’s forces took Morar on 16 June and then made a successful attack on the city.

On 17 June in Kotah-ki-Serai near the Phool Bagh of Gwalior, a squadron of the 8th (King’s Royal Irish) Hussars, under Captain Heneage, fought the large Indian force commanded by Rani Lakshmibai, who was trying to leave the area. The 8th Hussars charged into the Indian force, slaughtering 5,000 Indian soldiers, including any Indian “over the age of 16”. They took two guns and continued the charge right through the Phool Bagh encampment. In this engagement, according to an eyewitness account, Rani Lakshmibai put on a sowar’s uniform and attacked one of the hussars; she was unhorsed and also wounded, probably by his sabre. Shortly afterwards, as she sat bleeding by the roadside, she recognised the soldier and fired at him with a pistol, whereupon he “dispatched the young lady with his carbine”. According to another tradition Rani Lakshmibai, the Queen of Jhansi, dressed as a cavalry leader, was badly wounded; not wishing the British to capture her body, she told a hermit to burn it. After her death a few local people cremated her body.

The British captured the city of Gwalior after three days. In the British report of this battle, Hugh Rose commented that Rani Lakshmibai is “personable, clever and beautiful” and she is “the most dangerous of all Indian leaders”. Rose reported that she had been buried “with great ceremony under a tamarind tree under the Rock of Gwalior, where I saw her bones and ashes.“

Her tomb is in the Phool Bagh area of Gwalior. Twenty years after her death Colonel Malleson wrote in the History of the Indian Mutiny; vol. 3; London, 1878 ‘Whatever her faults in British eyes may have been, her countrymen will ever remember that she was driven by ill-treatment into rebellion, and that she lived and died for her country, We cannot forget her contribution for India.’

According to a memoir purporting to be by Damodar Rao, the young prince was among his mother’s troops and household at the battle of Gwalior. Together with others who had survived the battle (some 60 retainers with 60 camels and 22 horses) he fled from the camp of Rao Sahib of Bithur and as the village people of Bundelkhand dared not aid them for fear of reprisals from the British, they were forced to live in the forest and suffer many privations. After two years there were about 12 survivors and these, together with another group of 24 they encountered, sought the city of Jhalrapatan where there were yet more refugees from Jhansi. Damodar Rao surrendered himself to a British official and his memoir ends in May 1860. He was then allowed a pension of Rs. 10,000, seven retainers, and was in the guardianship of Munshi Dharmanarayan.