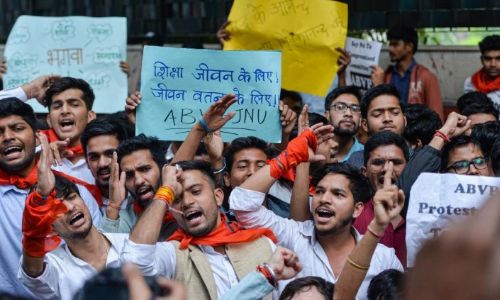 (PTI) The Jawaharlal Nehru Students’ Union on Thursday said they will hold a protest outside the HRD Ministry and demand that the recommendations of a committee, constituted to restore the smooth functioning of the varsity, be made public.

The protest will be held on Friday, they said.

The HRD Ministry had constituted a three-member high-powered committee to restore normal functioning of the varsity. The panel had submitted its report to the ministry on Tuesday.

The students’ union protest is being held to demand that the report be made public and the draft hostel manual, which has provisions for the hostel fee hike, be completely rolled back.

The students have been on a strike for a month against the hostel fee hike.

They said the administration is responsible for the academic loss suffered by the students and the semester should be increased.

They said time should be given for all the academic losses incurred. The students also demanded the removal of vice-chancellor Mamidala Jagadesh Kumar.

The agitation over the hike in hostel fee escalated on November 11 when thousands of students clashed with police outside the All India Council of Technical Education (AICTE) premises, where the JNU’s convocation was being held.

Union HRD minister Ramesh Pokhriyal ‘Nishank’ was stranded for over six hours at the venue.

The JNU’s Executive Council had then announced a partial rollback of the hike for students belonging to the BPL category and not availing any scholarships. However, the protesters dubbed it as an “eyewash”.

A week later, students undertook a march from the JNU campus to Parliament but were stopped at multiple locations by police.

The protesters alleged that police personnel baton-charged and manhandled them, a charge which was denied by the force.

The varsity had constituted an internal committee to look into the matter which made some suggestions but the students have rejected them.