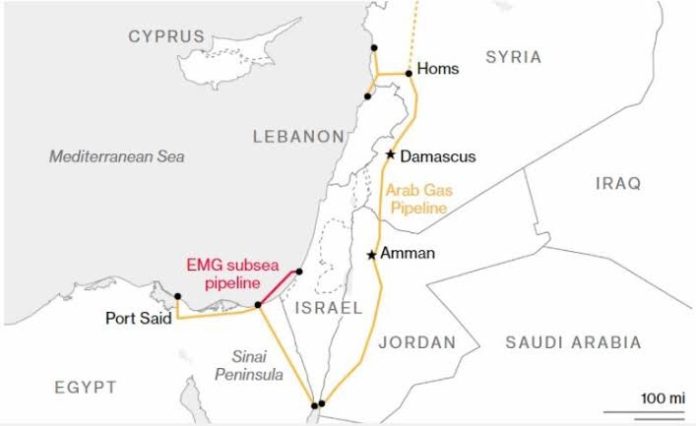 JERUSALEM (Reuters) – A deal that would transfer control of a natural gas pipeline between Israel and Egypt is expected to be closed in the next few days, the companies said on Sunday.

Texas-based Noble Energy, Israel’s Delek Drilling and Egyptian East Gas Co have partnered in a venture called EMED, which last year agreed to buy a 39% stake in the subsea EMG pipeline for $518 million that will carry Israeli gas exports to Egypt.

In a regulatory filing in Tel Aviv, Delek said the shares have already been transferred to the buyers while the funds are currently being held in a trust. It noted that no closing conditions remained.

“Upon the transfer of the full amount of the consideration to the sellers, which is expected to be performed in the coming days, the EMG transaction will be closed in practice,” Delek said.

Partners in Israel’s Leviathan and Tamar offshore gas fields had agreed to sell $15 billion worth of gas to a customer in Egypt — Dolphinus Holdings — but last month the deal was amended to boost supply by 34% to about 85 billion cubic meters, or an estimated $20 billion.

Noble and Delek are key partners in both Leviathan — which is set to start production in the coming weeks — and the existing Tamar field off Israel’s Mediterranean coast.

“The closing of the EMG transaction marks the dawn of a new era for the Israeli energy market – Israel’s transition to the status of a regional natural gas exporter,” said Delek Drilling CEO Yossi Abu. “The Leviathan project is moving ahead on schedule … and we expect to begin piping the gas from Leviathan already before the end of the year.”

The supply deal with Egypt is expected to start in January.

To buy into EMG, which owns the 90 km subsea pipeline between Ashkelon in Israel and El-Arish in Egypt, the three partners formed the joint company EMED.

East Gas holds 50% of the venture while Delek Drilling and Noble own 25% each.

The EMG pipeline has a planned capacity of around 7 bcm per year, with a possibility of increasing that to around 9 bcm per year via the installation of additional systems.

Delek Drilling’s shares were up 6.1% in afternoon trading in Tel Aviv.