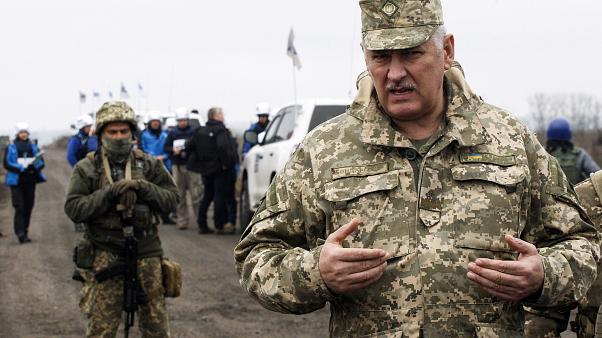 Ukrainian government forces and Russian-backed rebels began withdrawing from a village in the disputed Donbass region on Saturday, one of a series of measures that could pave the way for a summit between Ukraine, Russia, France and Germany. Servicemen of the self-proclaimed Donetsk People’s Republic walk to board a truck near the settlement of Petrovskoye (Petrivske), which is located in a disengagement area near the contact line with the Ukrainian armed forces in Donetsk region, Ukraine November 9, 2019.

Fighting between Ukrainian forces and Russian-backed fighters in the eastern region has killed more than 13,000 since 2014, with both sides accusing each other of violating a ceasefire that was agreed in the Belarus capital Minsk in 2015.

Relations between Ukraine and Russia collapsed following Moscow’s annexation of the Crimean peninsula in 2014, which prompted Western sanctions.

But Ukrainian President Volodymyr Zelenskiy won a landslide election victory in April promising to end the simmering conflict and Kiev has said its troop withdrawal from the village of Petrivske would mean it had fulfilled all necessary conditions it needs to for a peace summit to take place. Servicemen of the self-proclaimed Donetsk People’s Republic get ready to board a truck near the settlement of Petrovskoye (Petrivske), which is located in a disengagement area near the contact line with the Ukrainian armed forces in Donetsk region.

Moscow has blamed Kiev for delaying the four-way summit.

“I hope that we will not see any new attempts by Kiev to disrupt the implementation of the agreements on the withdrawal of forces,” Borys Gryzlov, Russia’s envoy to a working group on the conflict, said.

“I hope that the process of disengagement in Petrivske will be successfully completed in the near future,” he was quoted by Interfax news as saying.

Zelenskiy secured a landmark prisoner swap with Russia in September but his plan to grant a special status to the Donbass region as part of the peace effort has sparked some protests. Zelenskiy has said he would “never betray Ukraine”.

Ukraine says after the Crimea annexation Russia engineered quasi-separatist uprisings across a belt of eastern Ukraine that escalated into a full-scale conflict, something Moscow denies.

Two so-called People’s Republics, unrecognized by either Kiev or Moscow, have formed in the Donetsk and Luhansk industrial regions of eastern Ukraine, known as Donbass.